Posted by Tansu Yegen on Twitter, the caption of the video reads, "Very clever." 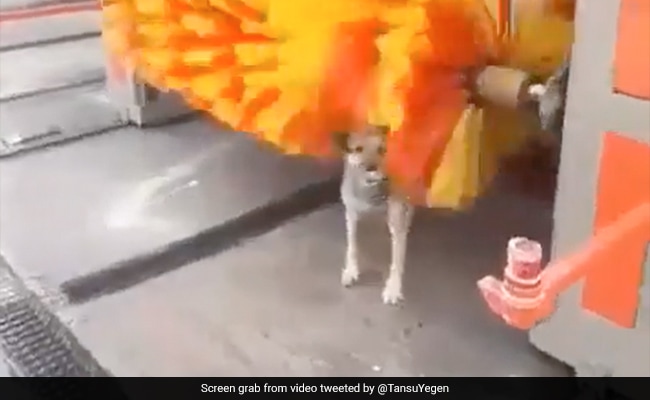 The video has accumulated more than 6 million views

Who doesn't like back rubs? Well, a hilarious video of a stray dog using an automatic car wash for back rub has resurfaced on the internet. In the 58-seconds clip, the dog can be seen standing at a car workshop where vehicles are being cleaned with giant brush rollers. The big brush roller has long bristles and it moves up and down for proper cleaning of the car. The moment the roller comes down, the pooch goes and stands under it and gets a relaxing massage from the long bristles of the giant brush. The dog seems to be loving the free massage.

Posted by Tansu Yegen on Twitter, the caption of the video reads, "Very clever." Since being posted, the video has accumulated more than 6 million views. The internet appreciated the dog's smartness.

A user wrote, "I dont want to ruin the fun. Its awesome vid and so cute. I just thought, if the doggo would do it regularly, maybe the chemicals used to wash the cars are toxic for the fur, but as i said, still very cute." Another user commented, "Hahaha this is so adorable! Wish we had such....Both for the car as well as the dogs."

"My dog would love that! He always rubs his back on objects that are the right height: my foot when I have one leg crossed, cross bar on table leg, bags hanging on back of kitchen chair, etc," the third user commented. "If this was a stray, I would totally adopt them. Looks like they just need scratches and cuddles," the fourth expressed.

Meanwhile, another video of a puppy German Shepherd's wholesome reaction when it meets little baby kittens for the first time went viral.

"German Shepherd puppy meets the new kittens for the first time," the video caption of the clip shared by Danny Deraney reads.

The video shows the mother cat lying on a bed with her newborn kittens. A puppy German Shepard walks in and adorably looks at the kittens with curiosity, but from a distance. To welcome its new friends, the dog even gets a toy for them.