"I was unaware of being upstaged by the young boy with some rather enviable dance moves during my forecast," Jen Bartram wrote. 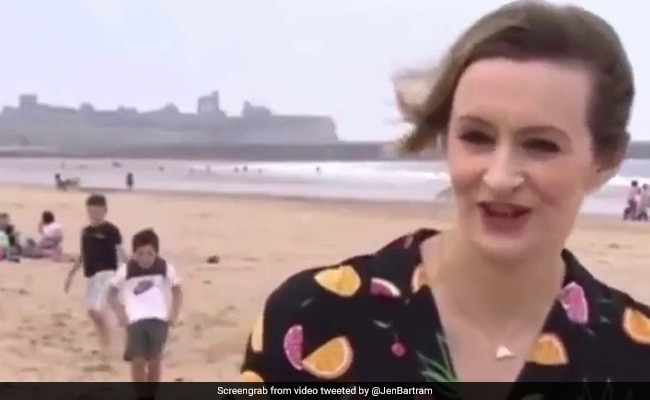 BBC presenter Jen Bartram was upstaged by a boy dancing behind her.

The hilarious moment a young boy stole the show by dancing behind a news anchor was captured on camera and has gone viral on social media. BBC presenter Jen Bartram was reporting from a windy beach in South Shields, UK, when she was upstaged by the boy and his impromptu jig.

The hilarious video shows the boy, who has since been identified as Leo, wandering into the frame and taking full advantage of the camera pointed at him by breaking out into a jig. The video, shared by Ms Bartram on Twitter, shows him lifting his shirt and showing off some rib-tickling dance moves on the beach, right behind the news anchor who was completely unaware of his presence.

"I was unaware of being upstaged by the young boy with some rather enviable dance moves during my forecast," Jen Bartram wrote on Twitter

I was unaware of being upstaged by the young boy with some rather enviable dance moves during my forecast ???? pic.twitter.com/KpOMX001uj

She also shared the clip with music added to it, writing: "I've given this forecast what it deserved. Sound on." Watch the video below:

I've given this forecast what it deserved. Sound on. pic.twitter.com/3hBCJLvjQo

Since being posted on the microblogging platform, the video has collected over 93,000 views and hundreds of amused comments.

"LOOOL this is so funny," wrote one person in the comments section.

"Nearly choked on my tea and toast laughing at this. So funny!" said another.

This is not the first time that a child has stolen the show from a BBC presenter. Recently, a live interview on BBC News between Dr Clare Wenham and anchor Christian Fraser was hilariously derailed when Dr Wenham's daughter interrupted their discussion.