"The one thing Mark wanted to make sure was on the invite was that pants were optional," says Jen. 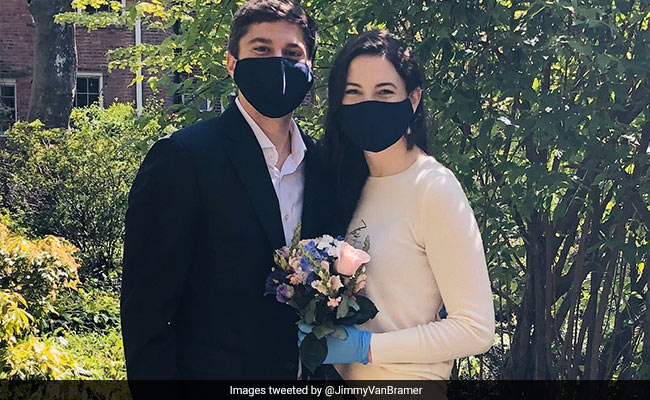 New York couple Mark and Jen got married as friends and family watched on Zoom.

Mark Van Name and Jen O'Leary of New York City had been planning their wedding for months when the coronavirus pandemic began shutting down much of the city. The couple had planned to get married in a church, followed by a big reception - but as the state went under lockdown to contain the spread of the highly contagious disease, they decided to postpone the ceremony to September.

Still, they were disappointed at not being able to marry on the date they had originally planned. And so, when Governor Andrew Cuomo began to allow couples to obtain marriage licenses remotely, Mark and Jen decided to go ahead with an intimate ceremony, hosted on video conferencing platform Zoom.

"The one thing Mark wanted to make sure was on the invite was that pants were optional," Jen, who works in technology management, told BuzzFeed News.

The couple called Councilmember Van Bramer's office for information, who offered to marry them in his backyard on Saturday, reports Pix 11.

And so, when the big day dawned, Mark and Jen put on their wedding finery - plus masks and gloves - and walked to Mr Van Bramer's home. There, the couple put their laptop on a stack of books so their friends and family could watch the ceremony, which took place keeping social distancing norms in mind.

According to BuzzFeed News, their friends joined them virtually - wearing tuxedos on top and shorts on the bottom. More than a 100 people joined the video call to watch the short and sweet ceremony, which Councilmember Van Bramer conducted standing 10 feet away from them.

He later shared photos of the wedding on Twitter, where they have delighted many. "I teared up as I married Jennie O'Leary & Mark Van Name! So grateful I could officiate today as they scrambled to keep their wedding date even though the big party will have to come later!" he wrote.

Here are some photos of the wedding I just performed in my backyard! I teared up as I married Jennie O'Leary & Mark Van Name! So grateful I could officiate today as they scrambled to keep their wedding date even though the big party will have to come later! #LoveWins#QueensWinspic.twitter.com/n3quMKacsR

The photos have collected nearly 2,000 'likes' on the microblogging platform since being posted. In the comments section, many congratulated the newlyweds and thanked the councilmember for officiating the wedding.

After the ceremony, the couple cut a cake that Jen baked, chatted with friends and family members and ordered Greek food for a fancy wedding dinner.

"The most important part of a wedding day is marrying your person," said Jen. "We were still able to do that."