The 33-second video shows a pale, human-like figure. It appears lanky and hunched over near the back garden of a home. 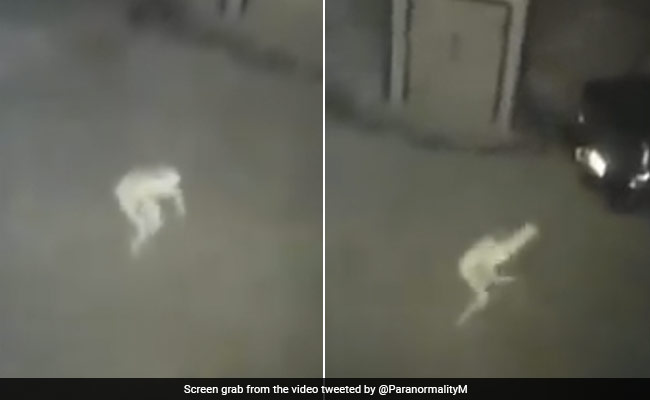 The eerie figure was caught near a house in Kentucky, the United States.

A video showing a mysterious pale figure is near a home in the United States is gaining traction on social media. The video has been caught on a CCTV installed in the area, and posted on Twitter by Paranormality Magazine. The accompanying tweet text says that the video was shot near Morehead, in Kentucky. The video has sparked a debate among paranormal enthusiasts around the world as to what it could be. The image resembles the human-like figures that caused a lot of destruction in the movie Spectral.

The 33-second video shows a pale, human-like figure. It appears lanky and hunched over near the back garden of a home. It is seen carefully moving ahead and looking around while approaching the home owner's car.

Here's the video of the Pale creature caught on a security cam near Moorhead, KY. #cryptidpic.twitter.com/jCexxlQTA0

In the audio of the clip, a person is heard saying, "You can see his face clearly."

The clip, shared with the caption "Here's the video of the Pale creature caught on a security cam near Moorhead, KY" on July 9, has amassed half a million views. Several Twitter users are intrigued by the video and have discussed what the figure could be.

"The question I have is, is this infrared? Because the pale creature would actually be dark colored (Dude in a black suit) and showing up white in that case. I know it's not your vid but things like that can reveal a lot of missed detail," a user commented.

"If this was taken with a security cam why is the camera moving like someone is holding it?   Security cams are fixed and don't float around," said another.

One of the local firms that claim to be working in the field of paranormal research replied, "To answer why the camera is moving, you can see the reflection of the person recording this footage from their phone in the glass of the monitor... as to what it is, a recording or a recording degrade the quality of the original footage. No way to know what we're seeing."

In the 2016 movie Spectral, the filmmakers had shown a moving Einstein-Bose condensate swirling around, killing people by freezing them from the inside and defying any attempts to destroy them with conventional weapons.

The movie too has led to a lot of buzz on the internet about the behaviour of the condensate.

Viral Video: Woman Drives Truck With A Smile On Her Face, Internet Calls It "Inspirational"