#MumbaiRains: In Maximum City, Monsoon Marked Its Arrival With A Downpour Of Memes

Mumbai Rains: The advent of the southwest monsoon was marked by social media users with some hilarious jokes and banter 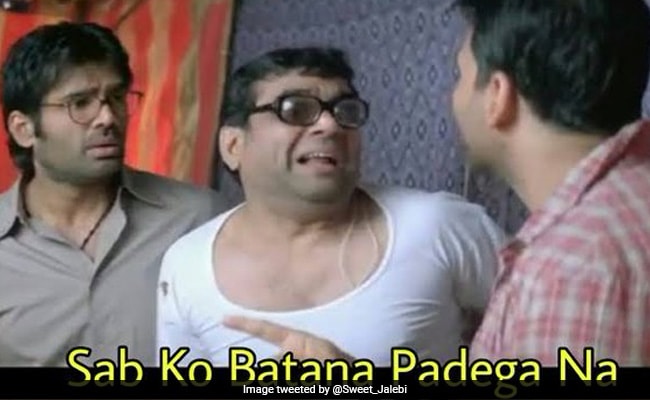 There are two kinds of people in the world; those who love the rains and those who detest them. If you are a resident of Mumbai, you really do not have much of a choice because there is just no escaping the monsoon in the city. And on Wednesday, residents of Mumbai braced themselves to welcome the first showers of the southwest monsoon. Social media users celebrated the romance as well as the ruinous nature of the monsoon with a bunch of memes and jokes on various social media sites. It was no surprise that #MumbaiRains soon became a trending topic on the microblogging platform, Twitter.

From the perfect meal to enjoy during the rain to the issues faced by people around this time of the year, there was a meme for every mood. As some parts of the city began to report inundation and water-logging, one user said that this time it was the sea that was visiting 'Mumbaikars' and not the other way around.

Hinting at the yearly trouble that citizens have to go through due to waterlogging brought on by the rains, stand-up comic Atul Khatri said, “ The 'Spirit of Mumbai' weather has started.”

The 'Spirit of Mumbai' weather has started..#MumbaiRains

But some users also decided to make the best of the situation. For instance, few residents of the city were spotted in their neighbourhood playground enjoying a game of cricket in the rain.

Given that the world is talking about vaccines, one user proposed the perfect “vaccine” for Mumbai rains.

Another user shared the perfect thing to do during the monsoon. Well, we cannot help but agree.

One Mumbai resident also shared a fun video to demonstrate how the romance associated with rains can wear off quickly when it just refuses to stop pouring.

Residents of Mumbai at the start of monsoon rain in city v/s when it keeps pouring for days! pic.twitter.com/yePyl7qe7f

That one friend in every group when it rains:#MumbaiRainspic.twitter.com/VRMGqM8Ouv

One user also commented on the enthusiastic social media banter among Mumbai citizens about something as mundane as the monsoon.

The southwest monsoon reached parts of Maharashtra on Wednesday, despite estimates of a later arrival by experts. The showers led to the inundation of roads and subways, which, in turn, resulted in the disruption in traffic and local train services. Over the next 48 hours, the monsoon is expected to reach other parts of Maharashtra as well as states such as Telangana, Andhra Pradesh, Odisha and Bengal.

Tell us your favourite thing about the monsoon in the comments.