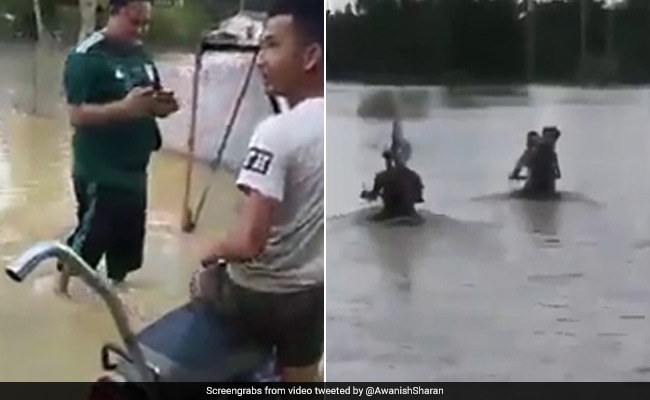 This 'jugaad' for riding on waterlogged streets is winning praise on social media.

The Indian spirit of jugaad never fails to impress. The Hindi word, which has even made it to the Oxford English dictionary, roughly translates to a clever hack. Jugaad is often celebrated as an example of the Indian spirit of resourcefulness and enterprise. It signifies doing more with less, or making the best out of meagre resources available. Videos and photos that embody the spirit of jugaad often go viral on social media and invariably garner praise for the innovation they display. This time, it is a jugaad for riding motorcycles on waterlogged streets that is winning a lot of appreciation on social media.

The videos which have surfaced on Twitter and are being widely circulated online show a couple of men riding bikes on waterlogged streets, which is generally not recommended, especially if the water level is above the exhaust. These men, however, have made modifications to their motorcycles which make them easier to drive on waterlogged roads.

IAS officer Awanish Sharan praised their jugaad in a tweet shared on Tuesday. "Have never seen before!! 'Jugaad' at its best," he wrote while sharing the video. While it is not clear where the video was filmed, many on the microblogging platform suggested that it was recorded in Assam - a state that recently witnessed heavy flooding.

Mr Sharan also warned that the modifications could be potentially dangerous while sharing the clip. Watch it below:

The video has collected over 9,000 views since being shared by Mr Sharan, along with a ton of comments praising the men and their creativity.

"I used to think that there this problem of water logging in the nation, so why haven't bikes or cars been provided with some accessory to deal with such situations. Looks like these boys did the required modification," wrote one Twitter user.

"Inspired by snorkels in real tough SUVs. Air intake pipe and exhaust so cost effective in this case," another remarked.