A glimpse at the answers Emily Gould provided on a character development form for her 4-year-old son Ilya was shared on Twitter by her. 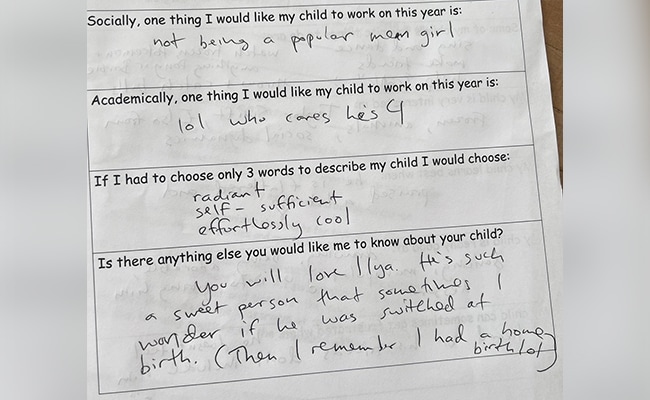 Schools use different ways to track the progress of children. Apart from holding parent-teacher meetings, they also periodically send questionnaires and feedback forms to parents. It frequently occurs with parents of schoolchildren that they are unable to comprehend the rules and procedures from the schools. But they often portray their child as a prodigy when completing any paperwork.

But an American mother responded on a school form with an open and caustic comment, and the internet users laughed out loud over a woman's brutally honest answers. Novelist, features writer at New York Magazine, Emily Gould, used Twitter to provide a sneak peek of the character development questions she answered for her 4-year-old son Ilya.

You will undoubtedly praise Emily's sense of humour after reading the post because it is so hilarious.

A picture of the answers typed on the school form is included in the post that was tweeted by her.

Here are the questions from the school and the responses by Emily on his son's school form.

1: "Socially, one thing I would like my child to work on this term is."

Emily's answer was, "Not being a popular mean girl."

2: "Academically, one thing I would like my child to work on this year is..."

3: If I had to choose only 3 words to describe my child I would choose:

4: The last question on the form was "Is there anything else you would like me to know about your child?"

The mother then offered another snarky retort. She wrote, "You will love Ilya. He's such a sweet person that sometimes I wonder if he was switched at birth. (Then I remember I had a home birth lol)."

Many people commented on the tweet and found Emily's humorous as well as scathing reactions amusing.

Other users said they would utilise Emily's witty responses in their own cases.