Tom Cruise Liked This Dish So Much, He Ordered It Twice At Asha Bhosle's Restaurant

The 'Mission: Impossible' actor took a break from his shoot and helped himself with two plates of the Indian dish in Birmingham 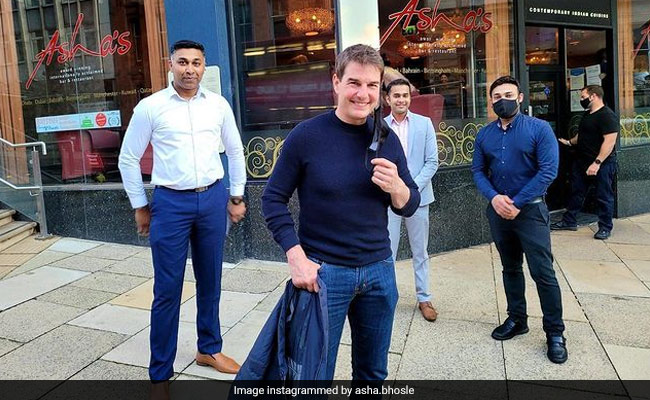 We bet you didn't know that Tom Cruise loves chicken tikka masala. Nor did we. But his trip to Asha's ( in Birmingham, UK), an Indian cuisine restaurant owned by veteran singer Asha Bhosle, suggests just that. The Mission: Impossible actor was spotted outside the restaurant where he posed with a smile alongside what looks like the staff of the hotel. Asha Bhosle herself acknowledged the Hollywood actor's appearance at the UK restaurant. She wrote in an Instagram post, "I was very happy to hear that Mr Tom Cruise enjoyed his fine dining experience at Asha's (Birmingham)."

She also invited him for another visit and added, "I look forward to him visiting us again soon!"

The official Instagram page of the restaurant revealed further details about Mr Cruise's visit. There, the caption read, "Tom ordered our famous Chicken Tikka Masala and enjoyed it so much that as soon as he had finished, he ordered it all over again."

The restaurant considered it “the greatest compliment” that they could have received from him. Asha's (Birmingham) has earlier greeted celebrities like Ed Sheeran and The Rolling Stones.

Tom Cruise's appearance at an Indian restaurant was a prized moment for his fans. Many commented "Amazing" on Asha Bhosle's post on Instagram. However, some users on the restaurant's official Instagram page, questioned whether or not it was really Mr Cruise who visited the restaurant.

One Instagram user wrote, "No way is that TC. Definitely a look-alike or stunt double."

Another followed suit, "That is not Tom Cruise."

However, Mr Cruise was seen only a few hours before at the Grand Central shopping centre and Birmingham's Bullring, shooting with co-star Hayley Atwell for Mission: Impossible 7, according to Dailymail.co.uk. Another report in Express.co.uk brushed aside all doubts and noted that Mr Cruise was seen in the same clothes as in this photo when he was spotted at Grand Central.

Some users were too glad to doubt his appearance at the restaurant.

One user almost swooned and wrote, "He ordered my favourite chicken tikka masala?!"

Another user wrote with some humour, "We were there the day before. He's always late to see me. What's he like?"

We can only say that Mr Cruise was busy while relishing his chicken tikka platter to be bothered by anything else.