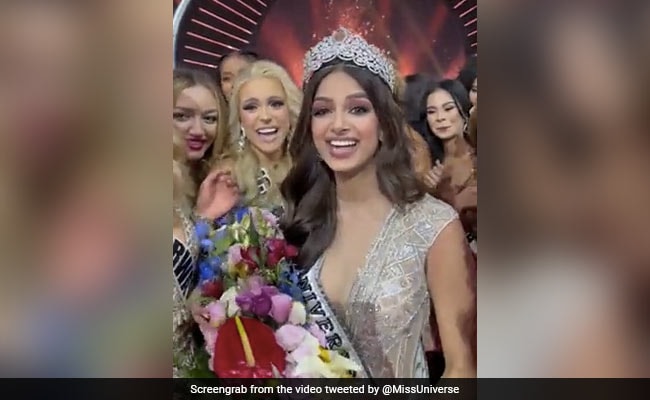 Harnaaz Sandhu brought home the coveted Miss Universe title 21 years after Lara Dutta's win in 2000. While the win gave Indians across the world a reason to celebrate, it was Ms Sandhu's video after the win that took the Internet by storm. Upon being announced the winner, an extremely overwhelmed Ms Sandhu broke down in tears.

The video of the special moment went viral in no time. So far, it has been viewed over 1.2 lakh times.

During the final question-and-answer round, Ms Sandhu was asked what advice she would give to young women on dealing deal with the pressures they faced today. To this, she replied that believing in themselves, understanding they are unique, which is what makes them attractive, was the biggest pressure on today's youth. She also urged the youth to stop comparing themselves to others and, instead, focusing on the more pressing issues worldwide.

Before her, only two Indians have won the Miss Universe title. While Sushmita Sen was crowned the winner in 1994, Lara Dutta won it six years later, in 2000.

At the end of event, Mexico's Andrea Meza, the reigning Miss Universe titleholder, passed on her crown to her successor, Ms Sandhu.