Melania Trump's Expression After Greeting Ivanka Is Breaking The Internet

Over 5 million views for this video of Melania Trump smiling at Ivanka. 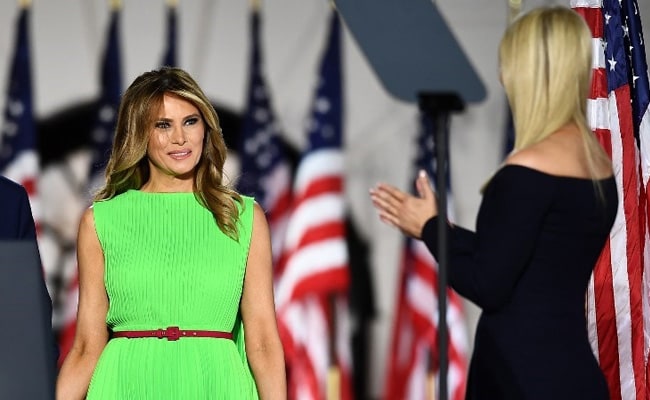 Rumours of tension between US First Lady Melania Trump and her stepdaughter Ivanka gained ground on the final night of the Republican National Convention (RNC) this Thursday. During the RNC, US President Donald Trump formally addressed his party members and accepted the party's re-nomination, reports CNN. However, much of social media's attention was focused on the moment Melania Trump greeted her stepdaughter Ivanka Trump onstage.

Ivanka Trump, Donald Trump's daughter with his first wife, Ivana, also serves as White House adviser. She had just introduced her father for his acceptance speech and was walking back when she was greeted by Melania Trump with a winning smile. The smile on the First Lady's face, however, soon turned into an eye roll in a moment that is breaking the Internet.

Melania Trump dressed in a striking lime gown by Valentino for the final night of the RNC, reports the New York Post. Ms Trump was seen smiling at her stepdaughter - but her expression hardened as soon as Ivanka passed her by. A video of Melania Trump's rapid change of expressions has gone viral, collecting over 5 million views in less than three hours of being shared on Twitter. Take a look:

This was so weird. #RNC2020pic.twitter.com/YHReTl0bfT

The video has created a huge buzz online - further fueling rumours that all is not well between the First Lady and the First Daughter.

Take a look at some of the reactions that the video has garnered:

I see that Melania and Ivanka are getting along juuuuust fine. pic.twitter.com/ktnmRBBG7Q

Did Melania just roll her eyes at Ivanka? @ProjectLincolnpic.twitter.com/EBFRheqOtD

According to People Magazine, Melania Trump's friend and former adviser Stephanie Winston Wolkoff is all set to release 'Melania & Me' - a memoir that reveals "shocking" details about the rivalry between the First Lady and her stepdaughter.

In her book, Ms Winston Wolkoff will reportedly detail "petty" attempts by Melania Trump to keep Ivanka out of the best photos during President Donald Trump's swearing in ceremony in 2016. According to CNN, she also claims in her book that Ivanka and her husband Jared Kushner tried to diminish and "control" Melania.