McDonald's Meals Not Cheaper Despite GST Rate Cut. Twitter Not Lovin' It 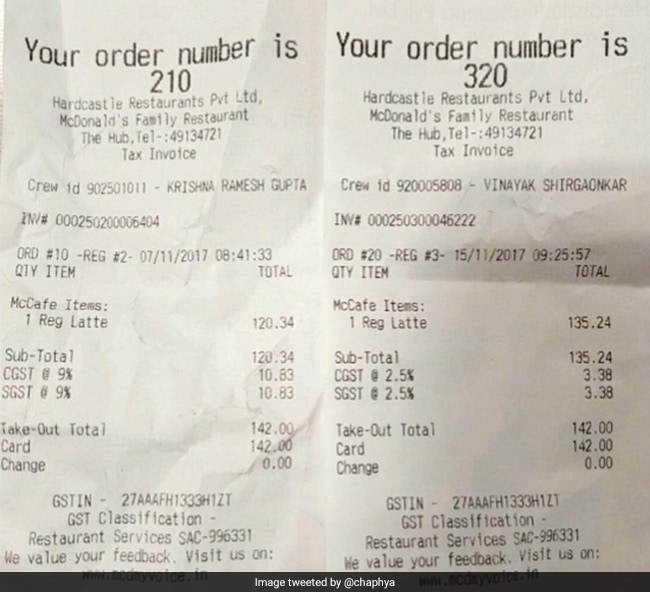 When the new rates came into effect yesterday, consumers were hoping to see their restaurants bill be considerably lower after companies said they will pass on the rate cut to the customers. But many astonished consumers lashed out at restaurants when they found their food bills didn't drop as drastically as they expected them to.

Angry customers on Twitter lashed out at fast food chains McDonald's and Starbucks along with pictures of food bills before and after last week's GST cut. Many pointed out that McDonald's has actually increased the MRPs (Maximum Retail Price) after the rate cut making the total bill nearly the same. Some even tagged the Finance Ministry in their tweets.

Shame on you @mcdonaldsindia Not passing on GST benefit to customers should be a crime @FinMinIndia Please take action! pic.twitter.com/P9J4gWNxfX

@mcdonaldsindia Soo nice of you after GST slab down from 18% to 5% , Subsequently you increase mrp #iamlovinit@arunjaitley@ZeeNews@ndtvpic.twitter.com/lgm1vXkHhp

.@arunjaitley@askGST_GoI@PMOIndia@adhia03 Do we have any regulation to stop such malpractice? This is being done by big name. Don't know how many small one would be doing this unnoticed. Shame @McDonalds@mcdonaldsindiahttps://t.co/iTtei4fj3o

This is what the restaurants are doing. To keep the net impact same they are increasing the base price and reducing gst from 18 to 5% pic.twitter.com/yGLegiT6K0

@mcdonaldsindia What is this? You guys think you are oversmart? I anyway don't eat your trashy food but will ask others to avoid. https://t.co/AYhg65jwyX

How delivery charges from rs. 25 goes to 30 and now 33 after gst slab got down from 18% to 5% @McDonalds@mcdonaldsindia

@mcdonaldsindia have hiked up their prices and then taken 5% GST! So No difference in the Final Prices

Trying to pacify angry customers, McDonald's India clarified that despite the GST rate cut, their costs have actually gone up as government removed Input Tax Credit. Restaurants earlier got input tax benefit on rent, food and other items which helped them to reduce cost. The company added that they have revised the bill structure in a way that the total amount paid by the customer remains the same.

Promoted
Listen to the latest songs, only on JioSaavn.com
"We believe in giving the best value to our customers, and have passed on the benefits wherever we could. We have substantially reduced the prices of some of our flagship products," the company added in a statement to NDTV.

The Government has brought down GST from 18% to 5%, but there has been a removal of Input Tax Credit.[1/3]

Due to this, our operating costs have gone up. However, keeping customer convenience in mind [2/3]

we have structured the changes in such a manner that total amount paid by the customer remains the same. [3/3]

Most were not convinced with that argument

So did u guys reduce the prices before levying 18% earlier when u availed input tax credit ? @askGST_GoI

Balant lies and deceit. They will never explain

That's the most lousiest explanation I have ever come across! Price to customer should reduce! Price it at 120 and pay 6 rupees tax (5% of 120) to government. Transaction value becomes 126.Instead you are raising price. Complete illogical

Stupid structure! Now if tomorrow GST is increased will you keep price to customer same? Your defence is weak

Please tell us how much you had reduced price post-GST when you were able to claim input tax credits?

Starbucks told NDTV that they too factored in the removal of the input tax credit to not reduce the overall prices. "Tata Starbucks complies with all the local laws and regulations. Following the recent revision in the Goods and Services Tax (GST) structure, we have ensured savings for our customers on every product. The rollout of the change in GST structure included the elimination of input tax credit, increasing costs for the industry. As a result, we raised our base prices, still providing savings for our customers after tax," the company said.