Luckily, the vehicle's owner was not inside it when the sinkhole opened up. 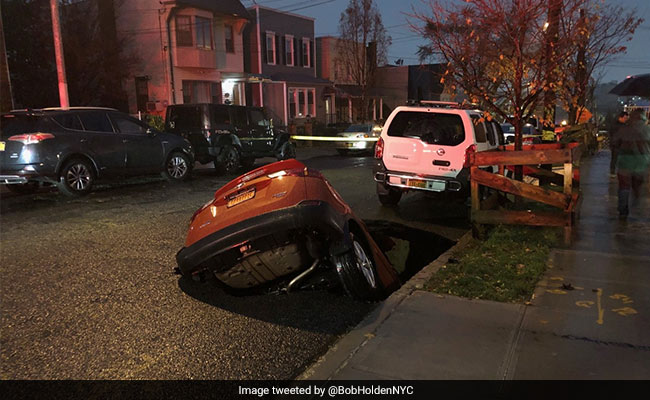 A sinkhole in Queens swallowed an orange SUV on Thanksgiving Day.

A massive sinkhole opened up in New York City this Thanksgiving Day, swallowing an SUV. The vehicle, an unoccupied orange Toyota RAV4, was found nose-down in the sinkhole in Queens early on Thursday morning, reports the New York Post.

Luckily, the vehicle's owner was not inside it when the sinkhole swallowed it. According to NBC News, the SUV belongs to a livery driver who is counting his blessings for escaping what could have been a dangerous accident.

"I feel lucky today," said Thupten Topjy, whose shift usually begins around the time his SUV was swallowed up by the sinkhole.

Shocking photos from the scene were posted on Twitter by City Councilman Robert Holden, who said that the sinkhole led to the closure of certain streets in the neighbourhood.

I have been informed of an unoccupied vehicle that fell into a large sinkhole in #Maspeth.

The New York City Fire Department and the city's police department both arrived at the spot but determined that there were no injuries.

The sight, however, was a shocking one for Thupten Topjy's brother, Wanzdi Sherpa. It was outside his home that the sinkhole opened.

"I'm very shocked right, very shocked because this was right in front of my house," Mr Sherpa was quoted as saying by NBC News.

It is not clear what caused the sinkhole to open up.

This is not the first time that a sinkhole has opened up in New York City. A similar thing happened in 2015, when residents of Brooklyn woke up to see a giant sinkhole had swallowed an enormous chunk of road.

This Baby Elephant Found A Friend In A Dog. Watch Their Adorable Video