"I'm going to get kicked out in three days, so we need to go on a date quickly." 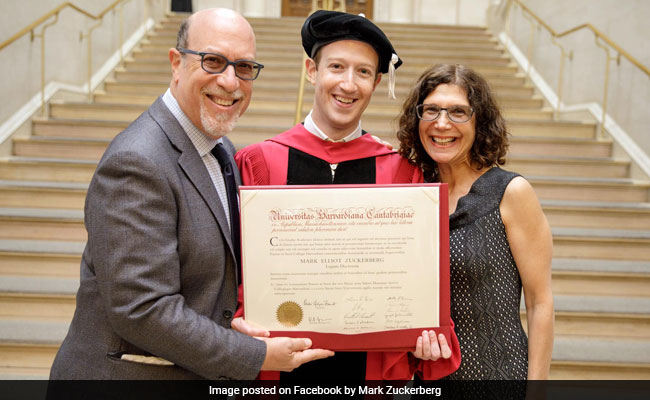 Facebook founder Mark Zuckerberg finally got a Harvard degree, albeit an honorary one

On Thursday, Facebook founder Mark Zuckerberg went back to school. Back to Harvard to be precise - the university he famously dropped out of in 2004 to focus on that social networking platform you may have heard of - Facebook. Mr Zuckerberg gave the commencement address and even received an honorary degree.

Speaking to young graduates, the 33-year-old billionaire had plenty of interesting things to say about purpose and community. But there's one sweet anecdote about his college years that stood out and that's the story of how he met his wife Priscilla Chan. He called it his "best memory from Harvard."

"I had just launched this prank website Facemash, and the ad board wanted to "see me". Everyone thought I was going to get kicked out. My parents came to help me pack. My friends threw me a going away party. As luck would have it, Priscilla was at that party with her friend. We met in line for the bathroom in the Pfoho Belltower, and in what must be one of the all time romantic lines, I said: 'I'm going to get kicked out in three days, so we need to go on a date quickly,'" he told the audience.

"Actually, any of you graduating can use that line," he joked.

Take a look at his wife's adorable reaction to the story:

The couple, now married for five years, have a daughter and are expecting a second child.

@CBSNews behind every successful man....

@BostonGlobe In todays world, it is refreshing to see expressions of love

Priscilla Chan and Mark Zuckerberg are goals asf for a relationship

Mr Zuckerberg hilariously recalled the moment he got into Harvard as well.

Promoted
Listen to the latest songs, only on JioSaavn.com
"How many of you remember exactly what you were doing when you got that email telling you that you got into Harvard? I was playing Civilization and I ran downstairs, got my dad, and for some reason, his reaction was to video me opening the email. That could have been a really sad video. I swear getting into Harvard is still the thing my parents are most proud of me for."

"Mom, I always told you I'd come back and get my degree," he wrote in a caption on a picture of himself with his degree and his beaming parents on Facebook. Better late than never.Click for more trending news