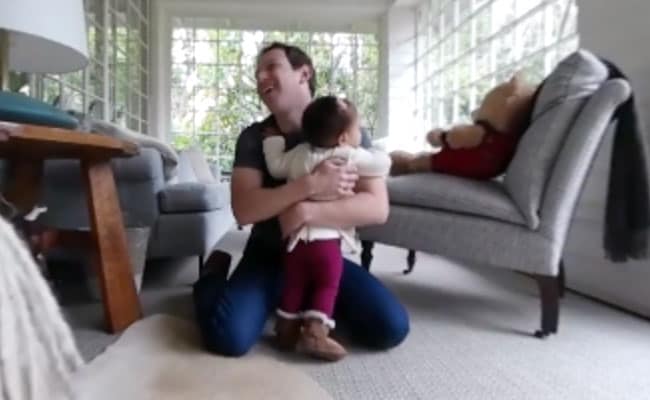 "This is modern walking" Mark Zuckerberg says in the adorable video.

Many parents click photos and videos to capture their baby's first steps and some share them on social media for their friends and family to see. Facebook superboss Mark Zuckerberg is no different. He also decided to share his baby girl Maxima Chan Zuckerberg's first few steps, except he did it through a 360-degree video.

"This is modern walking" says Zuckerberg in the adorable video which is now going viral. It not only shows Max, just over a year old, walking towards daddy and giving him a big hug but also Zuck encouraging her to walk towards him. All you have to do is swipe across the screen to see the different perspectives. There's also the cutest guest appearance from the family dog Beast, who almost steals Max's thunder but eventually steps aside and lets it be her moment.

"When I was a baby and took my first steps, my mom wrote the date in a baby book. When my sister's children took their first steps, she recorded it with photos and videos. When Max started walking, I wanted to capture the whole scene with a 360 video so our friends and family can feel like they're right there with us," Zuckerberg says on Facebook.

Promoted
Listen to the latest songs, only on JioSaavn.com
"WOW - this made my day!! Maybe the cutest EVER! YAY Max!!!!!" says one commenter on the video. "The joy on your face is nothing short of spectacular! Go Max! And Beast won't know what hit him!" says another.

Last year in December, Mark Zuckerberg and his wife, Dr Priscilla Chan, announced the birth of their daughter Max. They also announced that they would give away 99 percent of their Facebook shares, worth a whopping $45 billion, to charity during their lifetime.

This Airline Is Swapping High Heels, Pencil Skirts For Sneakers And Trousers