Mark Zuckerberg, Satya Nadella Were Drenched in Ice Water But Are Still Smiling 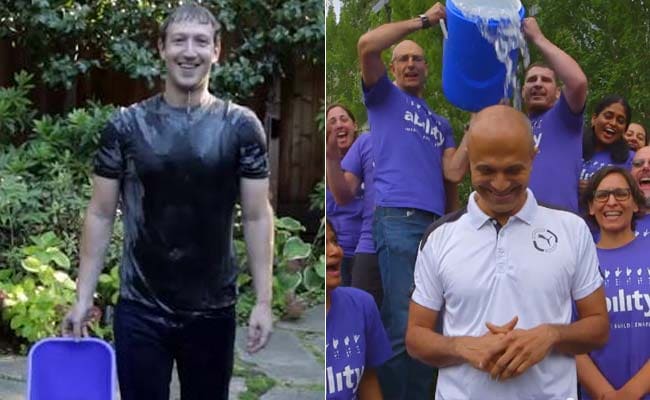 Having a bucket of ice-cold water dumped on you doesn't sound fun but it's all for a good cause. People all over America - including famous techies Mark Zuckerberg and Satya Nadella - have decided to create awareness for Amyotrophic Lateral Sclerosis (ALS), a neuro-degenerative disease, through an ice bucket tag challenge and it sure is working.

ALS affects approximately 5,600 Americans every year, has no cure, currently has just one medication which only slows down this fatal disease.

So, to create awareness, and to raise money for research for ALS treatments, people have taken up the bucket. The challenge requires the person who has been tagged to pour ice cold water on themselves and post pictures/videos of the act. This needs to be done within 24 hours of the tag or you donate money for ALS research.

Celebrities too have taken to this challenge with much enthusiasm and Microsoft's CEO Satya Nadella, Facebook's creator Mark Zuckerberg (who in turn tagged Microsoft founder Bill Gates and Facebook COO Sheryl Sandberg), international singer and actor Justin Timberlake and even TV personality Martha Stewart have done their bit for ALS awareness.

The last video in this list however, is the real star here. You have got to watch the craziness to believe it.


Here is Satya Nadella, with his team:

Twitter CEO, Dick Costolo refused to be left behind, so he went ahead and poured a bucket down his head too:

I've made a donation to stomp out ALS. I challenge @spencerrascoff. Your turn @carlquintanilla#icebucketchallengehttps://t.co/enub9GG4mo

Singer, actor and a holder of many other titles, Justin Timberlake is chillin' in this video. Literally. Watch:

This one however, takes not just the cake but the entire bakery shop. Ice Hockey player, Paul Bissonnette's outrageously planned and filmed ALS Ice Bucket Challenge: