James Hooper now has a new rule about toilets: "Look down before you sit down." 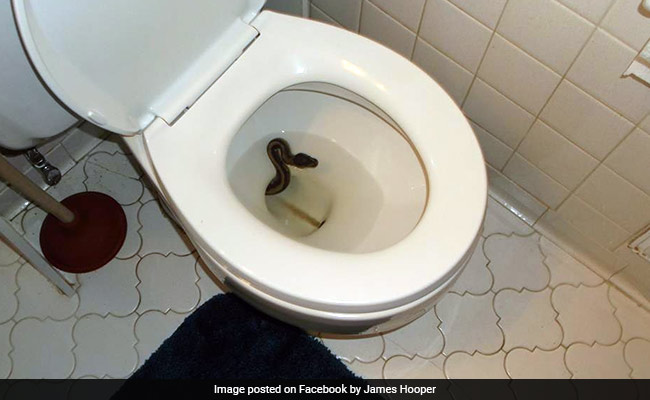 A photo of the ball python was shared on Facebook.

James Hooper now has a new rule about toilets: "Look down before you sit down." This seems sensible, given that James recently discovered a ball python inside his toilet. The Virginia resident discovered the snake peeking out of his toilet bowl on Thursday night.

According to local reports, James Hooper thought it was a prank when he looked down at the toilet and saw a snake sticking its head out. "When I saw the tongue of the snake, I was like, 'wow'," he said. "We've had snakes in the yard, but not in the toilet."

James then called his roommate Kenny Spruill. Together, they tied a noose to the end of a fishing pole, fished the snake out out and put it into a bucket outside before calling a Virginia Beach Animal Control officer. "It was not harmed while capturing it," clarified James in his Facebook post.

Photos of the snake, later identified as a non-venomous ball python, were shared online by James.

Ball pythons get their name from their tendency to curl up in a ball when scared or stressed, as the animal can be seen doing in the photographs shared.

As it turned out, reports News 3, the python was an escaped pet that had been missing for two weeks, until his owners saw the Facebook post that James put up. It has now been happily reunited with its family.

In May this year, a family in China found a snake in their toilet - it had escaped its owners who wanted to make snake wine with it.

Comments
Snake in toiletpythonpython in toilet