Man Couldn't Get In Touch With Mother On Train. Then Railways Did This 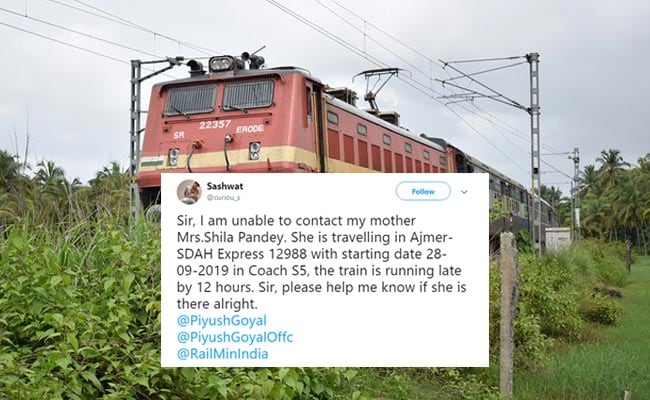 Indian Railways helped a man who was not able to contact his mother. (Representative Image)

On Monday, an anxious son, who couldn't get in touch with his mother as her train was running late, tweeted Indian Railways for help. "Sir, I am unable to contact my mother Mrs. Shila Pandey," wrote the Twitter user named Sashwat. He said that his mother was travelling on the Ajmer Sealdah Express that was running late by 12 hours. As he couldn't get in touch with her, he wanted to know if she was okay.

In his tweet, Sashwat tagged the Ministry of Railways and Railway Minister Piyush Goyal.

Sir, I am unable to contact my mother Mrs.Shila Pandey. She is travelling in Ajmer-SDAH Express 12988 with starting date 28-09-2019 in Coach S5, the train is running late by 12 hours. Sir, please help me know if she is there alright.@PiyushGoyal@PiyushGoyalOffc@RailMinIndia

Sashwat received a prompt response from Indian Railways Seva asking him for her PNR and contact number of his mother a few minutes after he posted his tweet.

I'm unaware of the PNR, but the ticket was booked from the IRCTC Rail Connect App with the Mobile No. 9415695943, the e-ticket in the form of a SMS was received in the same.

They also asked for the date of boarding and the boarding station before forwarding the matter to the Divisional Railway Manager, Asansol in West Bengal.

Matter is being forwarded to the concerned official. @Drm_asn

After that, DRM Asansol got in touch with the ticket checker on the train and helped Ms Pandey talk to her son. "Working TTE belongs to Sealdah division... he met with that lady and informed her. Now she is talking with her son," they wrote.

WORKING TTE BELONGS TO SEALDAH DIVISION.CONTACTED WITH HIM OVER PHONE AND TELL HIM ALL INCIDENT.HE MET WITH THAT LADY AND INFORMED https://t.co/i03nKnAw5w SHE IS TALKING WITH HER SON.

Sashwat also confirmed through a tweet that he was able to talk to his mother. Thanking the Indian Railways for their help, he wrote: "Thank you so much sir for your prompt action. I am grateful for your help."

@PiyushGoyal@RailMinIndia@PiyushGoyalOffc@DRM_ASN@RailwaySeva
Thank you so much sir for your prompt action. I am grateful for your help.????

@PiyushGoyalOffc
feeling happy to your immediate response and same time feeling sad to hear that train is running late by 12 hours.

What do you think of this incident? Let us know using the comments section.