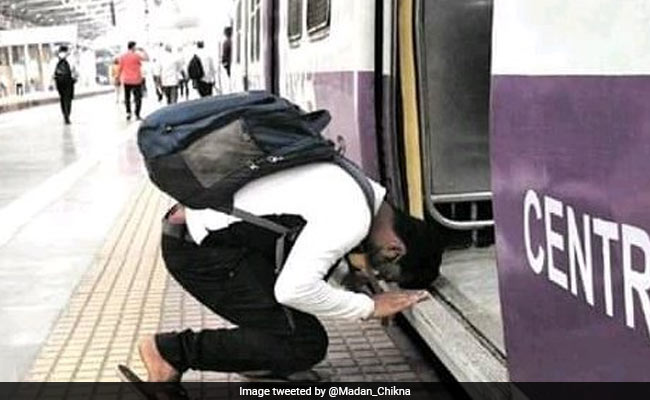 A photograph shows a man bowing down before a Mumbai local train.

Mumbai's local trains are considered to be the city's lifeline, ferrying lakhs of commuters between different ends of the Maximum City every day. Now, a photograph going viral online has captured the significance that local trains hold for lakhs of Mumbai residents. The photographs shows a man bowing down before a train as services resumed after months on February 1.

The suburban train services were suspended on the midnight of March 22 last year due to the COVID-19 outbreak. The suspension was the first in many decades - Mumbai's local trains have run uninterrupted for years, aside from a few brief interruptions.

In 1974, both the suburban and long distance train services in Mumbai were stopped for around 20 days due to a trade union strike.

The photograph of the man bowing before a local train in a gesture of respect has gone viral on Twitter with thousands of 'likes' and reactions.

Mumbai-based industrialist Anand Mahindra shared it and wrote: "The soul of India... I pray we never lose it..."

"Only Mumbaikars will understand the beauty of this action," author Devdutt Pattanaik said.

Ashok Kumar Verma, Divisional Railway Manager Bengaluru, confirmed that the photograph was taken at Mumbai's Chhatrapati Shivaji Maharaj Terminus and said that it captured why the Mumbai local trains are known as the city's lifeline.

This beautiful picture has been taken at CSMT Station PF no 2 when local services started for all on 01/02/2021. the sentiment captures why #MumbaiLocalTrains are known as the #LifelineOfMumbaipic.twitter.com/aEZTjcKKxg

"Nothing can match Mumbai Locals. When you live paycheck to paycheck, the confidence a monthly/quarterly season pass gives you is priceless," one Twitter user remarked.

"That's how significant the famous Mumbai Local train is to a regular commuter. It is a lot more than just a lifeline, it is a deity," another said.

After a gap of about 320 days, the Railways permitted all members of the general public to travel in local trains in Mumbai from Monday morning, though for limited hours. The general public is allowed to travel in the suburban trains from the time of the start of services for the day till 7 am, from 12 noon to 4 pm, and from 9 pm till the closure of services for the day.