"We did not want to be discriminatory. It is not as though girls who are not beautiful are not allowed. " 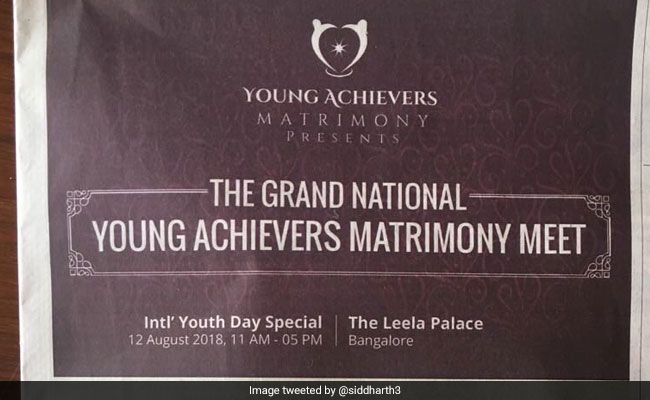 An advertisement printed on the front page of a prominent newspaper in Bengaluru went massively viral for all the wrong reasons yesterday. The advertisers, Young Achievers Matrimony, were calling for registrations for a matrimony meet on August 12 in the city. However, it was the language used by the advertisers, deemed "casteist, elitist and offensive," that outraged netizens.

Achievements include successful entrepreneurship, entry into elite universities... or for women, just being beautiful.

(Pic stolen from @KabirTaneja who is a young achiever himself). pic.twitter.com/h5aURz6cJB

The ad called for young achievers - graduates from IITs and IIMs, people working as Chartered Accountants, or IAS or IPS officers - to attend the matrimony meet. Also placed alongside these young achievers, in a bullet point that outraged the Internet, were "Beautiful girls."

It's 2018 and there's a young achievers matrimony meet that promises beautiful girls. This whole thing is regressive on so many counts. pic.twitter.com/qgp8qAXMsZ

The ad was deemed offensive and regressive, as well as classist as it asked for "ultra rich families" to apply. It received massive backlash on Twitter.

Matrimony meet for "young achievers" (for women it translates to 'beautiful girls'), and ultra rich folks. Front page of The Hindu today. pic.twitter.com/WpQ07OAT1n

"Young achievers matrimony meet" appalled to see this #ad floating on social media. Who are the young achievers? Doctors #IITians#IIAMs. High net families? Is this a business deal or what? Worst still, this event is sold out! Good luck to marriages based on these qualifications! pic.twitter.com/YlZVx1TIJY

Now, The News Minute reports, the man behind Young Achievers Matrimony, Sreeram N, has apologised for the ad. A written apology on page 3 of the newspaper that carried the original ad has also followed.

As promised, Mr Sreeram who put the Young Achievers Matrimony ad, apologised today. It's published on page 3 of The Hindu Bangalore edition. pic.twitter.com/x6usaSpTvC

"We did not want to be discriminatory. It is not as though girls who are not beautiful are not allowed. The YAM matrimony meet was for young achievers and actually that is the only criteria," Mr Sreeram told TNM.