Lizard Found Inside Bag Of Broccoli, Survived Flight From Spain To Scotland

The exotic Iberian wall lizard was dubbed Brock after being discovered inside the cellophane-wrapped broccoli. 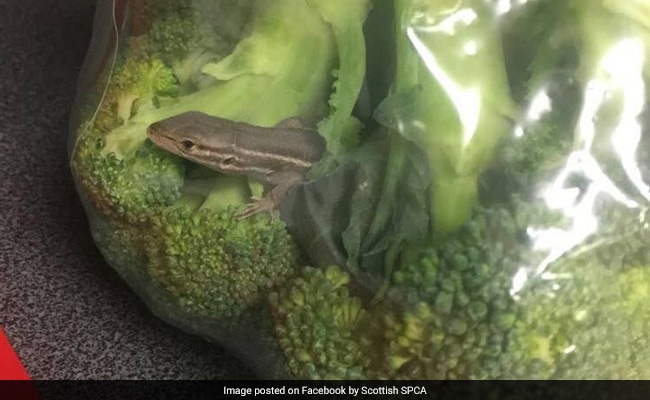 The lizard, dubbed Brock, was dehydrated when discovered by supermarket staff in Scotland

A lizard survived a flight from Spain to Scotland after getting trapped inside a bag of broccoli. The Iberian wall lizard was found at a supermarket in Lanarkshire. According to the Scottish Society for the Prevention of Cruelty to Animals (SPCA), the lizard was discovered by an employee at the store on May 11.

SPCA posted a picture of the lizard, dubbed Brock, to Facebook on June 2 and wrote in a press release that the lizard was "dehydrated but otherwise unharmed from his adventures."

"As he's not a native reptile, Brock couldn't be rehomed like our normal rescues," SPCA Chief Inspector Fiona Henderson said.

She explained the lizard is now being cared for by experts.

"In this case, he's gone to live in a multi-habitat vivarium at the Scottish Exotic Animal Rescue center with reptile expert Nick Martin," Ms Henderson said. "The vivarium is designed to mimic Brock's habitat as closely as possible and it seems he's settled in perfectly well despite his broccoli ordeal."


According to The National, the reptile, native to Spain and Portugal, is normally found on cliffs, walls and rocks at altitudes of up to 2,500 metres. It's still unclear how it wound up in the shipment of vegetables from Spain.Click for more trending news