The mannequins have been outfitted in police uniforms. 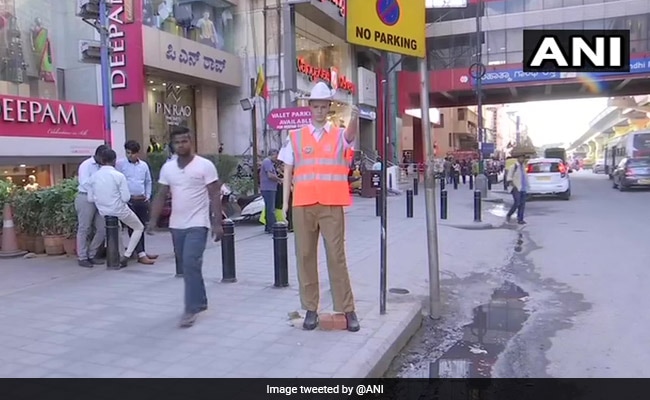 A mannequin deployed by Bengaluru Police.

Bengaluru Traffic Police has come up with an innovative solution to the city's infamous traffic problem. Life-size mannequins, dressed as traffic police personnel, have been placed at important junctions of the city to regulate traffic and deter traffic rules violators.

Pictures shared on social media show mannequins, outfitted in police uniforms complete with vests, boots and even hats, placed around the capital city of Karnataka.

Bengaluru's Kengeri Traffic Police shared two photos of the mannequins on Twitter, writing that they had been deployed for traffic management at Madhu Junction.

Other residents of the city also shared photos of the mannequins on duty. Many also praised the unique initiative.

At the junction of MG Road and Brigade Road, Bangalore traffic police have installed a mannequin dressed in uniform, sort of like an elaborate scarecrow, to ensure people obey rules and don't jump signals. pic.twitter.com/MwKKUhD3Ix

According to news agency ANI, Dr BR Ravikanthe Gowda, Joint Commissioner of Police, (Traffic), Bengaluru, said that the mannequins have been useful in controlling "habitual violators" and response to the unique initiative has been positive.

"Response to this initiative is very positive. People also take selfies with the mannequins. It's useful in controlling habitual violators," said Dr Gowda.

Life size mannequins dressed as traffic police have been placed at important junctions in Bengaluru. Jt Commissioner of Police, Traffic says "Response to this initiative is very positive.People also take selfies with the mannequins. It's useful in controlling habitual violators". pic.twitter.com/zOtVzAXm6m

What do you think of this traffic management initiative by Bengaluru Traffic Police? Let us know using the comments section.

He added that Bengaluru Traffic Police is also planning to fit these life-size mannequins with cameras to record violations. "Contact-less enforcement can be possible with these," he said.