Find out which sister Kylie Jenner told first about her pregnancy. No, it wasn't Kim Kardashian 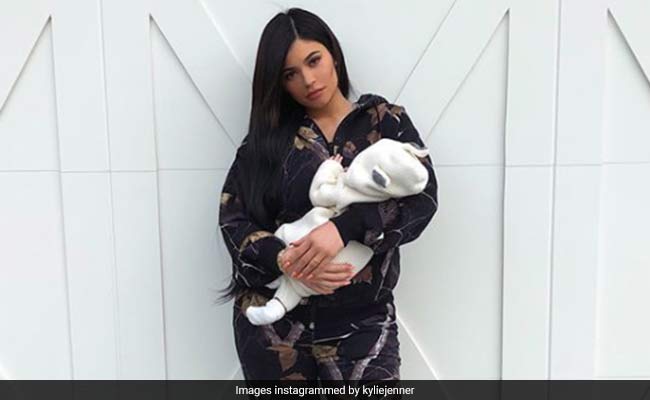 American reality TV star and makeup mogul Kylie Jenner delighted fans with an an impromptu Twitter Q&A about her adorable baby girl Stormi - appropriately titled "Sundays with Stormi." Earlier today, the 20-year-old shared interesting details about her pregnancy - including listing (almost) all of her cravings - and highlights from baby Stormi's life. Kylie welcomed her first child with boyfriend Travis Scott on February 1.

Promoted
Listen to the latest songs, only on JioSaavn.com
Kylie's mom (and manager) Kris Jenner was supportive after she broke the news of her pregnancy

what was mama kris' reaction when you told her you were pregnant??

she was sooo supportive. I love my mama https://t.co/RVauQm5PbD

@KylieJenner which sister did you tell first that you were pregnant?

i think it was Khloe! Maybe Kourtney https://t.co/7aYTDlTQTM

Kylie and Travis initially thought they were having a baby boy

Before finding out the gender of your baby, did you think it was a girl or a boy?

we thought we were gonna have a boy! i was soooo surprised! https://t.co/4Y7oJUUveu

And while we're on the topic of Travis, Kylie thinks he's "the best" with his daughter Stormi

Kylie reveals she had a "perfect" pregnancy. The worst part? Not being able to eat sushi!

I know she's and all, but can you describe what it was like while you were pregnant?... did she move a lot was she still? ... what was the best part? What was the worst part?... I need the deets sus ... I'm listening...

there really was no worst part! probably not being able to eat sushi lol I had such a perfect experience. she moved a lot https://t.co/4IPq9Wv2yh

Speaking of sushi, Kylie admitted she had some pretty strong cravings during her pregnancy.

@KylieJenner What is your number 1 craving when you were pregnant?

Eggos!!! I never liked them before i was pregnant & haven't had one since i had her. so strange! Lol https://t.co/uCeljtsMP0

Lmao and in n out!! Donuts too https://t.co/JMBmFeHcUH

Were you afraid of giving birth? I'm just a year older than you and this is my number 1 fear about having a baby.

I wasn't afraid! & you shouldn't be either. We were made for this https://t.co/yteSWaboXX

Turns out Stormi hasn't laughed yet - but she smiles a lot! Don't worry Stormi-watchers, momma Kylie promises she'll let you know when she does.

I want to hear the way Stormi laughs

She hasn't laughed yet. But she smiles A LOT https://t.co/55gF5Hyqi6

Though it's a picture of baby Stormi's tiny hand wrapped around her mom's perfectly manicured finger that is the most-liked Instagram post of all time, it's her tiny toes that get Kylie every time

@KylieJenner what's your favorite feature of stormi's? she's so precious

well all of her! but her little toes get me every time https://t.co/iqC5aeqlTc

In a move that many found surprising for the social media maven, Kylie Jenner (and the rest of the Jenner/Kardashian clan) kept the news of her pregnancy under wraps. Kylie announced her pregnancy to the world on February 5. Along with a note to her fans, she shared an Internet-breaking video that highlighted the most special moments of her journey to motherhood.

Kylie is best-known for her appearances in "Keeping Up With The Kardashians". A few years ago, she launched an insanely-popular (and often sold-out) cosmetics line called Kylie Cosmetics. Last year, the reality star was seen in "Life of Kylie", a behind-the-scenes take on her life.Click for more trending news

Viral Video: Woman Calmly Talks On Phone As Train Passes Over Her, Internet Says "Give Her Tight Slap"