On KBC, Sudha Murthy Talks About Being Only Woman In College Of 599 Men

On KBC, Sudha Murthy says she was asked to wear only sarees in college. 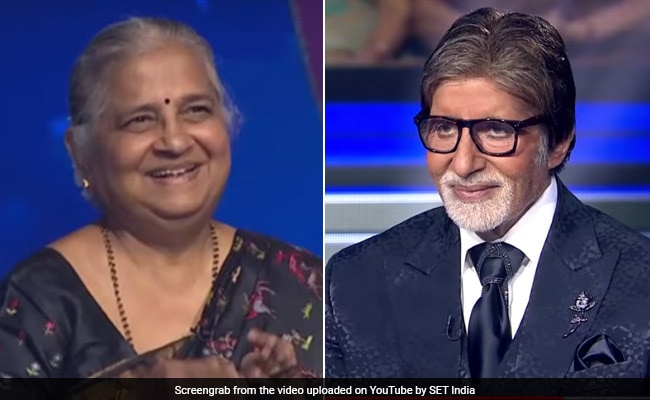 The final episode of 'Kaun Banega Crorepati 11' will air on Friday, November 29. The episode will see host Amitabh Bachchan welcome author, philanthropist and Infosys Foundation chairperson Sudha Murthy to the show. A short teaser of the much-awaited episode, shared by Sony TV on Instagram, shows Mr Bachchan describe Ms Murthy as an extraordinary social worker for her work with Infosys Foundation. The video also shows Ms Murthy captivate the audience with short, inspiring anecdotes from her time in college and her work as a philanthropist.

In the teaser, Ms Murthy begins by talking about being the only woman in a college of 599 men when she chose to study engineering in Hubli, Karnataka. She recalls that she was asked by the principal to wear only sarees, not go to the college canteen and not talk to the men in college when she joined.

"I agreed to the first condition," she says in Hindi. "The canteen was so bad, I wouldn't have gone anyway," she says of the second condition, drawing chuckles from the audience.

And as for the third condition of not talking to boys in college, Sudha Murthy had the best answer: "Ek saal nahi kiya. Doosre saal unko malum hua mujhe first rank mila, vahi humse baat karne aaye (I didn't talk to them for one year. In the second year, they got to know I got the first rank and came to talk to me themselves)," she says to laughter and applause.

She fought against all social stereotypes. Meet our #KBCKaramveer #SudhaMurthy this Friday at 9 PM and know how she reformed thousands of underprivileged lives. @amitabhbachchan

A post shared by Sony Entertainment Television (@sonytvofficial) on Nov 25, 2019 at 5:27am PST

Since being shared on Instagram one day ago, Sudha Murthy's video has collected over 58,000 views and a ton of comments.

"Pride of Karnataka," wrote one person. "Almost worth 1.2BILLION.. still so grounded," another said, while a third added "She is living legend."

The eleventh season of Kaun Banega Crorepati will end on November 29. The show airs on Sony TV from 9 pm from Monday to Friday.