Over 4 million views for the hologram video of Robert Kardashian. 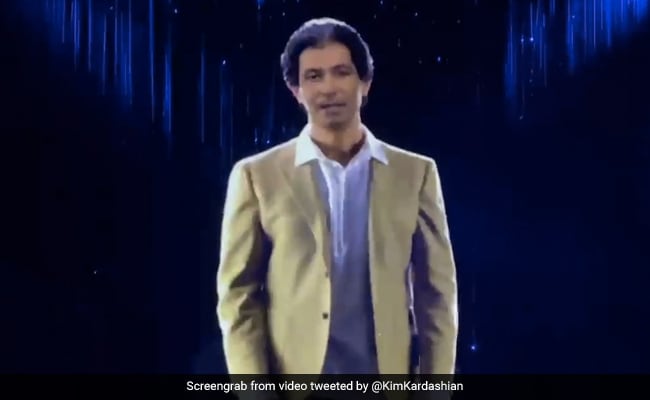 Kim Kardashian shared a video of the hologram that husband Kanye gifted her.

American reality TV star Kim Kardashian received ''the most thoughtful gift of a lifetime'' from husband Kanye West for her 40th birthday: a hologram of her late father, Robert Kardashian.

The SKIMS founder tweeted: "For my birthday, Kanye got me the most thoughtful gift of a lifetime. A special surprise from heaven. A hologram of my dad."

She continued: "It is so lifelike! We watched it over and over, filled with emotion."

The KKW Beauty mogul also shared a two-minute clip of the hologram.

"I am so proud of the woman that you've become, Kimberly, and all that you have accomplished," the hologram of the late attorney said in part.

For my birthday, Kanye got me the most thoughtful gift of a lifetime. A special surprise from heaven. A hologram of my dad. ✨???? It is so lifelike! We watched it over and over, filled with emotion. pic.twitter.com/jD6pHo17KC

According to Fox News, Kim Kardashian recently came under fire for her birthday celebration: a big party on a private island.

Kardashian shared several photos from her party on social media on Tuesday, which showed that the party was attended by a large number of people in close proximity to one another without wearing masks amid the coronavirus pandemic.

In the caption of the post, the star said that she had asked all her guests to quarantine and undergo several "health screens" before she surprised them by flying them to a private island to celebrate her special day.

"I realize that for most people, this is something that is so far out of reach right now, so in moments like these, I am humbly reminded of how privileged my life is," she added.

In reaction to the post, followers commented to express their frustration with her apparent lack of regard for the ongoing public health crisis and its financial impact. Several people called it "very selfish" while many abide by quarantine measures and follow health guidelines when interacting with others.

Fox News reported, on Thursday (local time), Kim's sister, Khloe, acknowledged the frustrations on the episode of ''The Ellen DeGeneres Show,'' but voiced her hope that the backlash doesn't taint Kim's memory of the birthday.

"I haven't heard a lot about it, but I did hear that people were upset that we all went out of town. I don''t really know the extent of it," the 36-year-old star told DeGeneres.

"But this year is a frustrating year. I get it. I think there's so many frustrations going on for everybody," continued the Good American founder.

"But also it's her 40th. This is something that she wanted to do for us. It was such a nice thing," Khloe said, adding that the group was about 20-25 people.

This Car Can Transform Into An Airplane. Watch As It Takes Flight