"Thank you for celebrating our rich culture," writes one commenter 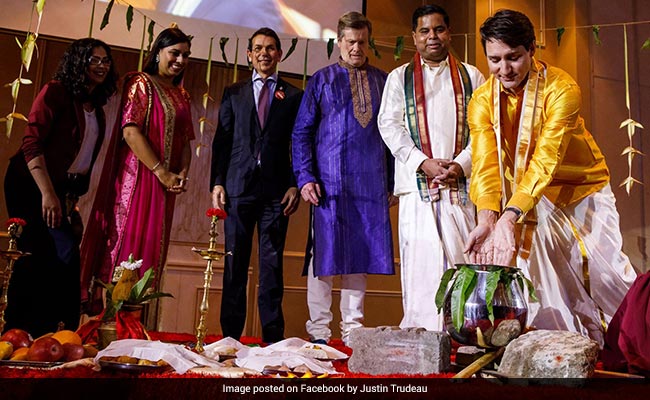 In a winning gesture, Canadian Prime Minister Justin Trudeau celebrated the festival of Thai Pongal while wearing a kurta and a traditional veshti.

Photos shared on his social media accounts show him celebrating the popular Tamil harvest festival and the Tamil Heritage Month in Canada. "Iniya Thai Pongal Nalvazhthukkal!" or 'sweet Pongal greetings', wrote Mr Trudeau in his post that has garnered over 21,000 'likes' on Facebook in just six hours.


The Mayor of Toronto, John Tory, joined Mr Trudeau in preparing 'pongal' - a dish made of rice and lentils. It is traditionally made during the festival of Pongal, which the rest of India celebrates as Makar Sankranti.

Today is the last day of the 4-day-long festivities where revellers thank mother nature for plentiful harvest.

On January 14, Mr Trudeau had shared a video to wish Tamils in Canada and around the world a happy Pongal. "Tamil Canadians make important contributions to our country and help keep Canada open, inclusive and strong," he said in his address.

His wishes have received lots of love on social media.

"Thank you Justin Trudeau! Bringing all the nations of the world together in thoughtful discussions. Canada is a beacon of light and hope in the world," writes one user in the comments section on Facebook. "Undoubtedly best leader of this world, as an Indian I never knew meaning of this word nor celebrate Pongal in my region. But kudos to you for celebrating Indian festival in Canada," says another.

Promoted
Listen to the latest songs, only on JioSaavn.com
In the past, the Canadian PM has wished Indians in Canada on Eid, Diwali and Vaisakhi.