From cooking to spending time with the world's biggest celebrities, Jeff Bezos' Instagram is a hit. 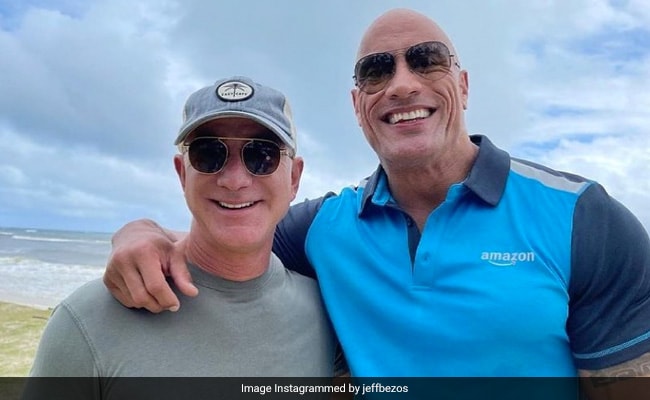 Tech billionaire Jeff Bezos hands over the reins as Amazon's CEO to Andy Jassy today. While the 57-year-old will continue to serve as executive chairman of the company as well as its biggest shareholder, there are other things on the anvil for the world's richest man. As space exploration and philanthropic endeavours top the list, Mr Bezos' social media timeline suggests that he will be indulging in some well-served downtime as he bids adieu to his role as the chief. If it is impossible for you to imagine the business magnate having some fun, we suggest that you take a look at his Instagram feed.

From cooking to spending time with the world's biggest celebrities, here are some of our favourite picks from the billionaire's social media feed.

While Mr Bezos has been quite vocal about fulfilling his desire to travel to space, it looks like this is not the only dream that he is making possible. In a post that is bound to make you smile, Mr Bezos announced that  82-year-old aviator Wally Funk will be joining him on his Blue Origin space flight later this month. In the post, he explained that Ms Funk was "at the top of her class as part of the “Mercury 13” Woman in Space Program. Despite completing their training, the program was cancelled, and none of the thirteen flew." The caption to the video added, "It's time. Welcome to the crew, Wally. We're excited to have you fly with us on July 20th as our honored guest."

With his dog Luna

Imagine the richest man in the world getting his hands dirty while giving his bath a dog. Well, now you can see what it looks like with Mr Bezos giving his dog, Luna a wash under the tap at home. Sharing a photo of the cute canine looked bewildered, he wrote, "Luna, it was time." Needless to say, the post was a huge hit with the billionaire's followers.

Mr Bezos likes to cook as well as enjoy a waffle or two, and he shared a photo as proof. Sharing an image of waffles, cream and some delicious hot chocolate, he wrote, "One word: waffles. Joy of Cooking recipe except also fold whipped egg whites into the batter. Made them only for the kids, of course. Ok, maybe I had a couple too."

Jeff Bezos also gave us a peek into the rockstar side of himself when he shared an image of him rocking a bomber jacket alongside rapper Lil Nas X. Posting the image, Mr Bezos wrote, ".. and I had some fun with Lil Nas X and Katy Perry backstage."

Now that he will have some free time, lets see what the billionaire would be up to next.