"It's A Boy!": Meet The Rare Black Rhino Baby Born On Christmas Eve

The species is considered critically endangered. 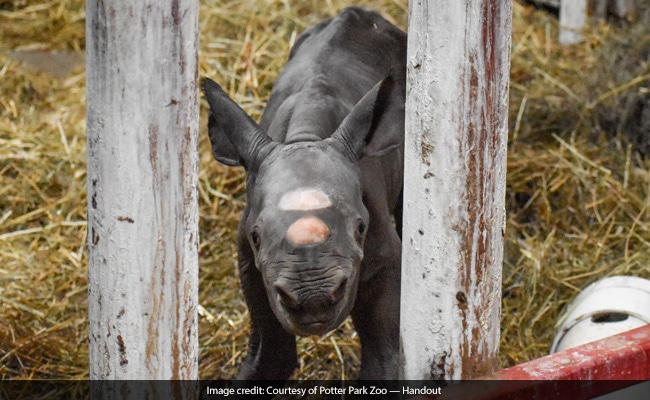 He was not born in a manger, and there were no wise men, nor frankincense or myrrh. But the masses are still flocking to see him.

Meet the Potter Park Zoo's Christmas Eve miracle, a black rhino calf born at 5:40 a.m. on Dec. 24 in Lansing, Michigan. "It's a boy!" the zoo wrote in the calf's birth announcement. The little guy does not yet have a name, but he has been collecting fans since before he was born. A video feed of his mother, 12-year-old Doppsee, broadcast his birth on the zoo's Facebook page.

The baby rhino stood within an hour and a half of appearing in the world, nursed for the first time midmorning and has been the star of the zoo's social media pages since. The calf appears healthy and has been bonding "behind the scenes" with Doppsee, according to a news release from the zoo. This is Doppsee's first offspring - and the first time in the Potter Park Zoo's 100-year existence that a black rhino has been born there.

The species is critically endangered, the result of poaching in the wild and loss of habitat. About 5,000 black rhinos exist in the African wild, an improvement from their historically low numbers 20 years ago, when the population was less than 2,500 and on the brink of extinction, according to the World Wildlife Fund.

The zoo's new calf was bred as part of the Association of Zoos and Aquariums Species Survival Plan program, which aids population management and conservation within AZA member institutions. There are more than 50 black rhinos in AZA zoos, and one of them - Phineus - came to the Potter Park Zoo in 2017 from Texas to breed with Doppsee. Less than two black rhino calves are born annually in captivity, according to the zoo's new release, making each newborn "vital to this endangered population."

"This is a monumental moment for Potter Park Zoo that has taken our staff years of planning and hard work," Cynthia Wagner, director of the Potter Park Zoo, said in a statement. "We are dedicated to conserving rhinos and couldn't be more excited about this successful black rhino birth."