Caught In A Lie: Insta Model Pretends To Fly Business Class, Called Out By Fans

The picture in question shows Oceane in a green and purple tracksuit, with the business class section of the airplane visible behind 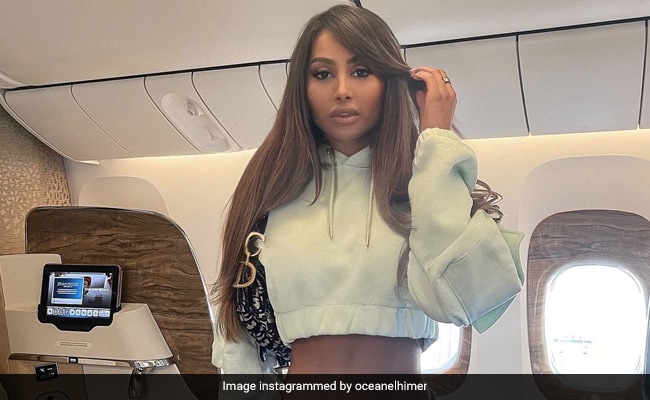 Oceane El Himer was photographed in the economy section after sharing a pic from business class.

Instagram model Oceane El Himer has become the target of social media's ridicule after she was caught in a barefaced lie. Oceane -- a French influencer who boasts of 8 lakh followers and an Instagram full of glamorous vacation pictures -- recently posted a photo from the business class section of an airplane, before returning to her seat in the economy class.

The picture in question shows her in a green and purple tracksuit, with the business class section of the airplane visible behind her as she flew from Dubai to Monaco. In her feed filled with snaps from exotic locations around the world, it doesn't look out of place. However, it soon transpired that Oceane, who is also a reality star in France, returned to her seat in the economy class after taking the picture.

According to The Mirror, an eagle-eyed fan noticed Oceane sitting in the economy class and took a photograph of her, which they later shared on social media. In the picture, she can be seen wearing the same outfit as the one she had shared earlier.

While there is nothing wrong at all in travelling economy, her followers did take objection to the fact that the 27-year-old had been pretending to fly business class - and critical comments soon started flowing in.

"Instagram vs reality," wrote one Twitter user. "Busted! Did she forget there are people around her to unmask her?" another wondered.

Several others called out the reality TV star for "showing off".

As the picture gained more and more attention, Oceane turned off the comments on her Instagram post and, a few days later, shared another pic from business class. The pic, which shows her flipping the bird, was cheekily captioned "Cette fois ci promis j'ai paye". According to Ladbible, this translates roughly as: "This time I promise I paid."

One day ago, she shared another pic from business class and wrote, "Merci a tous , grace a vous j'ai un abonnement en Business! (thanks to you I have a Business subscription!)".

This is not the first time an influencer has been called out for faking it for the 'gram. In 2019, one odd detail gave away this influencer's constant photo editing.