Incredible Video Shows Fish Being Dropped Into Lake During Restocking

The fish are usually between 1 and 3 inches and specifically raised for fishing. They are dropped into fishless lakes. 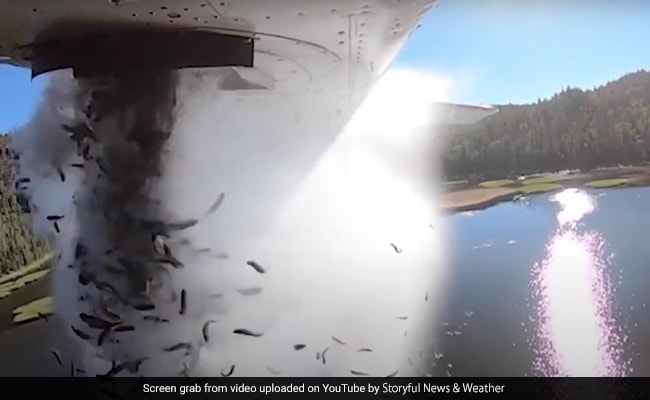 Thousands of brook trout were dumped into a reservoir lake in Utah.

An incredible video has surfaced on social media, which shows a plane dumping thousands of fishes in a lake. It has been released by the Utah Division of Wildlife Resources (DWR), which said that the exercise was part of its annual restocking of remote lakes. It is carried out throughout spring and early summer, DWR further said.

In the video, the small fry are seen coming out of the aircraft along with gallons of water and going straight into the lake. The footage has been made available by Storyful.

It identified the fish as brook trout and the place as Silver Lake Flat Reservoir in the Wasatch Mountains region.

The aerial method of fish stocking has been used in Utah since 1956 and more than 300 high-elevation lakes are aerially stocked each year to help sustain healthy fish populations, according to the DWR website.

"There is a pretty good survival rate from this method of fish stocking," Utah DWR wrote on Facebook. "When we do this, we only stock very small fish. The fish are small enough that the air slows their drop. The slower fall allows the fish to survive," it added.

The fish are usually between 1 and 3 inches and specifically raised for fishing. They are dropped into fishless lakes that do not have any natural reproduction, and are often sterile.

The DWR had earlier said that this method allows the state to control the number of fish and does not affect any native fish populations.

Before the 1950s, the agency loaded fish into milk cans drawn by horses to remote areas. But it claims that plane drops are much quicker, cost-effective, and "less stressful" for the fish and all parties involved.