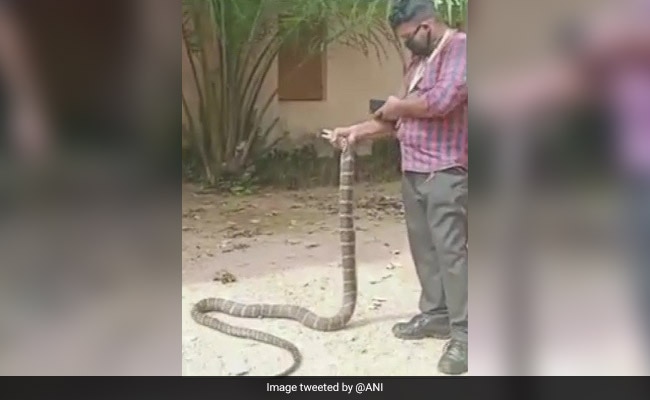 A King Cobra was rescued from a well in Odisha.

A King Cobra has been rescued from a well in Odisha. The rescue operation took place in the Burujhari village of Ganjam district on Wednesday with the help of members of the snake helpline.

Locals in the village first saw the snake inside an abandoned well and immediately informed the forest department. Forest officials then sent a team of the snake helpline, working in the Khollikote forest range, to the village.

The snake was rescued after an hour of hard work by them. Swapnalok Mishra and Mihir Pandey -- the two team members of the team -- said that the reptile was approximately 12-15 feet long.

Photos shared on microblogging platform Twitter show the huge snake being captured by the rescue team. The four photos were shared by news agency ANI. Take a look:

Odisha: A King cobra was rescued from a well in Burujhari village of Ganjam district earlier today. It was later released into the wild. Swapnalok Mishra, a snake rescuer says, "The king cobra is 12-15 feet long." pic.twitter.com/OHTslLv6Q0

The snake was later released in the forest on the orders of Khallikote forest official after a health check-up.

The King Cobra is the world's longest venomous snake, endemic to the forests of India and Southeast Asia. Earlier this month, a 15-feet-long King Cobra was rescued from a village near Coimbatore in Tamil Nadu.