In Flood-Hit Vadodara, Crocodile Sneaks Up Behind Dog On Street. Watch

The 3.5-foot crocodile was captured on Thursday morning 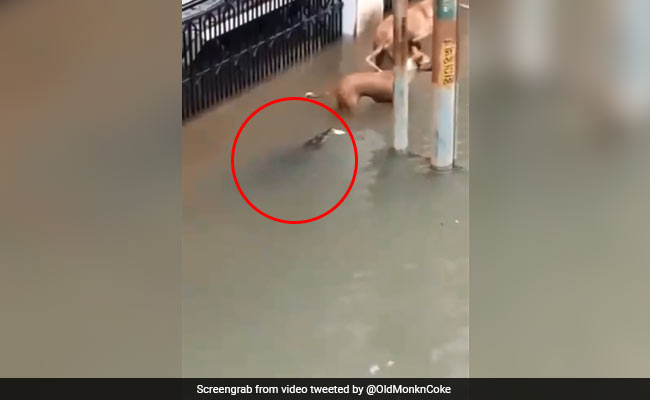 A video of a crocodile trying to attack a dog in Vadodara has gone viral online.

Amidst heavy rainfall that triggered flash floods in Vadodara, Gujarat, a scary video of a crocodile attacking a dog on a water-logged street has gone viral. The video, which has been doing the rounds of social media and messaging platforms since Thursday, shows a crocodile swimming on flooded street. In the short clip, it sneaks up behind a dog on the street and tries to attack it - unsuccessfully.

Got this on whatsapp #VadodaraRains#Vadodarapic.twitter.com/DxGCR0loni

The crocodile was approximately 3.5-foot-long. After being captured by Wildlife Rescue Trust, it was handed over to the forest department.

Mr Pawar told NDTV that the crocodile had probably entered the society after a taalab or pool behind the area, connected to Vishwamitri River, overflowed due to heavy rains. The river, which flows through the city, is home to a number of crocodiles.

Claims of this from Akota. What makes floods in #Baroda scarier than anywhere else #crocodilepic.twitter.com/73LZV540Tr

Mr Pawar confirmed to NDTV that rescue operations to catch the other crocodiles are on in the city.