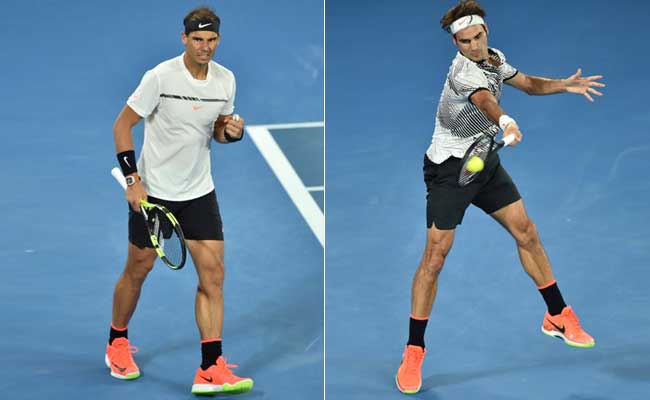 Tennis fans couldn't have asked for more from an Australian Open final as Roger Federer played and then won against Rafael Nadal in the men's single final of the tournament on January 29. The two tennis aces were facing each other in their ninth Grand Slam final and needless to say, it was a nail-biting match between the two. However, there was one little thing that was stealing people's focus from their game. Tweeple were quick to notice a 'match' of a different kind on-court. Turns out both Federer and Nadal were wearing the same shoes for the final.

At a time when most people were finding it hard to look away from the game or the scoreboard, some on Twitter couldn't stop focusing on the players' footwear. While some wondered if the two decided on this prior to the match, others decided they too would pick up similar pairs for themselves. Many also pointed out that both the players were also dressed in the same colour scheme - white tshirt and pairs of black shorts.

This isn't entirely a new phenomenon but Twitter just couldn't keep calm and carry on with the game, thanks to the same shoes.

Promoted
Listen to the latest songs, only on JioSaavn.com
Take a look what Twitter had to say:

As if charisma of these two was not enough. Those shoes! #AusOpen

I should get some pink shoes #AusOpen

Do the players match their shoes on purpose? #AusOpen

Federer and Nadal are wearing the same shoes and shorts. #AusOpen

I say that #FedererNadal had a convo before the match to wear identical items just their opposites, except the shoes, of course #AusOpen

Pink shoes, they match there too #AusOpen

Looks like we have a dress code in #AusOpen#Final. A White t-shirt, a black #short and pink #shoes. #FedererNadal#Fedal.

Are the wearing similar pair of shoes? #AusOpen#FedererNadal#AusOpen2017

This is Roger Federer's 18th Grand Slam title. He was playing a Grand Slam final against Rafael Nadal for the first time since the 2011 French Open.

It was indeed a great match but what do you think about their same shoes? Tell us using the comments section below.
Comments
Rafael NadalRoger FedererAustralian Open 2017TennisTwitterreactions