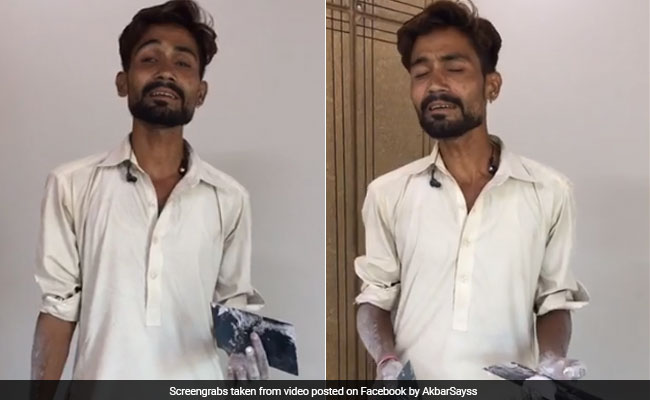 Muhammad Arifs viral video has collected over 3.7 million views and some 96,000 reactions.

No one spots talent like the Internet does. Just months ago, social media made "dancing uncle", Sanjeev Srivastava, a household name, all thanks to his killer dance moves. Now, another talent has emerged and this time too, the Internet's banding together to make him famous. A video that's gone crazy viral all over social media shows a painter in Pakistan singing wonderful renditions of famous songs. The video - and many versions of it - has won the Internet over.

Muhammad Arif went viral after a Facebook live showed him crooning songs like Hamari Adhuri Kahani, Channa Mereya, and Phir Le Aya Dil among other soulful numbers. The video shows him belting out the numbers one after another while he continued doing his work on the house.

The renditions have won many fans online. Since being posted on August 1, the video has collected over 3.7 million views, some 96,000 reactions and more than 66,000 shares. Other versions shared on Facebook and Twitter have also received thousands of views and 'likes'.

Watch and listen to Muhammad Arif below:

The video, and its versions, are filled with comments praising the singer's talent.

"Yaar he brought tears in my eyes. Such a soulful voice. Amazingly mesmerising. You can listen to him for hours and hours. Deserves to be a celebrity," says one Facebook user. "Natural voice with great feel. Really sang well. Hope someone will definitely give him an opportunity. All the best," says another.

So I saw this on fb and decided we need to make this guy just as famous if not more than the #chaiwala. Apparently he's from Pakistan and just listen to his voice for yourself pic.twitter.com/tGh3nYbdLq

This man deserves to go viral, to all my brown friends please rt this he needs a right platform to show his talent. His name is Arif pic.twitter.com/Ej5gkzLixz

Several people on Twitter tagged @cokestudio asking to give the singer an opportunity.

Muhammad Arif now has his own Facebook page and even posted a another video on Friday which is winning major love.

What do you think about Muhammad Arif and his voice? Tell us using the comments section.