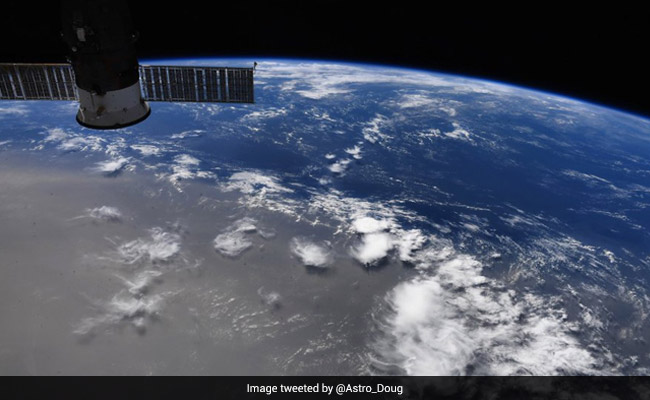 A picture of the Saharan dust plume, as visible from space.

A NASA astronaut has given the world a stunning glimpse of Earth, as seen from space. Colonel Doug Hurley, who is currently on board the International Space Station, shared a photo of a Saharan dust plume spreading over the Atlantic Ocean a few hours ago.

According to CNN, the much-anticipated Saharan dust plume is making its way across the Atlantic from Africa to the United States. The dust, straight from the Sahara Desert, is so thick that it is clearly visible from space as grey clouds spreading over blue water.

"We flew over this Saharan dust plume today in the west central Atlantic," wrote astronaut Doug Hurley while commenting on the massive size of the plume. "Amazing how large an area it covers!"

Take a look at his photograph below:

We flew over this Saharan dust plume today in the west central Atlantic. Amazing how large an area it covers! pic.twitter.com/JVGyo8LAXI

In the little over 13 hours since the picture was shared on the microblogging platform, it has collected over 22,000 'likes' and hundreds of comments.

"Thank you for sharing all of these amazing images with us!" another said.

The swath of dust is being carried across the planet by east-to-west Trade Winds. "Large plumes of Saharan dust routinely track into the Atlantic Ocean from late spring into early fall. Every so often, when the dust plume is large enough and trade winds set up just right, the dust can travel thousands of miles across the Atlantic and into the US." CNN Meteorologist Haley Brink said.

Doug Hurley is one of the two astronauts who went to space earlier this month in a historic flight. Mr Hurley and Robert Behnken entered the International Space Station on June 1 after a landmark 19-hour journey on SpaceX's two-stage Falcon 9 rocket.