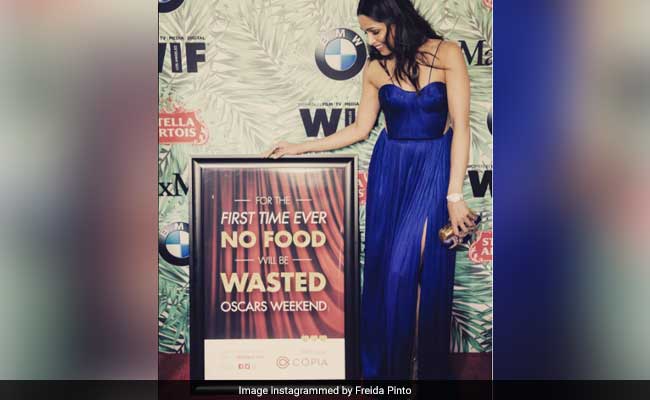 The biggest night in Hollywood always ends with a big bash. And what's a party without food? After this year's Academy Awards, stars partied the night away at the Oscars Governors Ball, with food catered by celebrity chef Wolfgang Puck. The menu was ridiculously extensive: from taro root tacos with shrimp, mango, avocado and chipotle aioli to lobster corn dogs and luxurious gold-dusted truffle popcorn. And this year, Slumdog Millionaire star Freida Pinto made sure leftover food from several of the Oscars weekend parties was redistributed to hungry Los Angeles residents.

When Awards Week gives back - food that would have otherwise been wasted has now been shared and connected with the LA LGBT Center , just 3.3 miles away from the Event in Los Angeles. Wastage isn't glamorous, feeding people is! #zerowaste #zerohunger #eatlikeastar @gocopia

The Stories that feed our culture has now fed OVER 800 people. Sharing excess food to feed our community is a No- Brainer. Thank you @filmindependent #spiritawards @gocopia @lamission for making this happen! #zerowaste #zerohunger #eatlikeastar

Freida worked with San Francisco-based food recovery technology company Copia to ensure no party food was wasted. Speaking to Vanity Fair magazine earlier, she said: "Our aim is to ensure that no one goes hungry in our film and TV town of Los Angeles by recovering leftover foods from all of our big parties and events." According to Freida's Instagram, Copia managed to feed over 800 people with the leftover food from all the Oscars weekend parties.

Promoted
Listen to the latest songs, only on JioSaavn.com
This is just some of the food that was served at the Oscars parties:

Here's a taste of what's cooking behind the scenes.

When @TheAcademy Awards show comes to a close on Sunday night, we’ll be focused and choreographed in the #kitchen. This will be our 23rd #GovernorsBall #gala celebration! #WPCatering #Oscars

Here's how Copia transported and distributed the leftovers:

In the United States an estimated 40% of all food produced goes to waste.

As Salon notes, Wolfgang Puck has previously partnered with Chefs to End Hunger, a nonprofit that redistributes excess party food. "At America's food service establishments, a tremendous amount of excess food is thrown away at the end of each night," Brette Waters of Chefs to End Hunger tells Salon. "At the same time, nearly 50 million Americans live in food insecure households, including more than 15 million children." That means all those people do not have access to nutritious food.

What do you think of the initiative? Let us know in the comments section below.