How A Life Jacket And Whistle Saved This Kayaker's Life

"We don't often have happy endings when the situation is so dire," Candy Thomson, a Natural Resources Police spokeswoman, said. "But (Sean Danielson) survived because he did three things: wore his life jacket, had a whistle and stayed with his lime-green boat so he could be seen as it got dark." 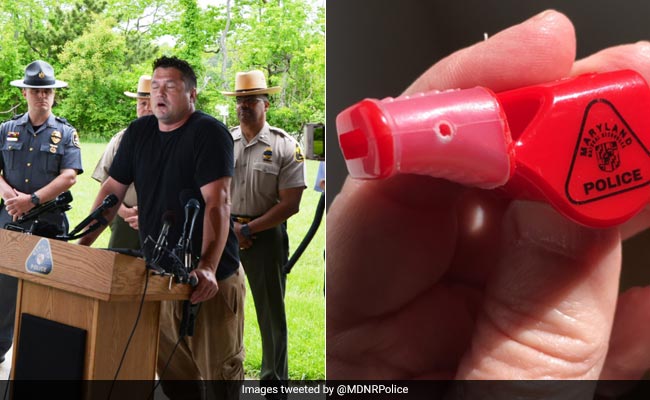 A life jacket and a whistle.

It was these two items that helped to save Sean Danielson after his kayak overturned in the cold, deep waters of the Chesapeake Bay last month. He waited for nearly three hours as the sun descended, suffering from hypothermia before he was rescued by boaters.

With the help of Maryland Department of Natural Resources Police, Danielson, 44, met the four people Wednesday who rescued him that mid-April evening as police honored them for saving his life. He doesn't remember all of the details about the rescue because he was in and out of consciousness.

"If it hadn't been for [the life jacket] and Good Samaritans, I wouldn't be here today," he said.

The reunion set the stage for the agency to kick off its annual boating safety campaign ahead of the Memorial Day holiday.

Nationwide, 701 people were killed in boating incidents in 2016, the highest number since 2011. About 80 percent of those deaths were drownings, some of which might have been prevented with a life jacket, officials said. Maryland officials credit their safety campaign with helping to reduce the number of fatalities from 21 in 2015 - a 20-year high - to nine last year.

Danielson, an angler who lives in Shady Side, Maryland, along the western side of the bay, said he hopes his story encourages people to wear a life jacket.

On the day of his ordeal, he said he went out about 3 p.m. in his kayak near the West River and headed north into the Chesapeake. Using a tool that measures water depth, he wanted to find deeper water to catch fish, but then a wave came "out of nowhere" that flipped the kayak, he said. While in water 20 feet deep, he said, he tried unsuccessfully to flip it upright.

"I tried to bail the water out but the waves would come and fill it," he said.

It was early in the boating season and no boats were in sight. He blew his whistle, "hoping someone would hear it."

"I told myself to stay calm and stay with the kayak," he said.

As the sun went down, he tried to stay calm in the 40-degree water. At one point, he thought of swimming toward the shore but decided it was best to stay with the kayak.

"I was just hopeful that a boat would come by," he said.

With such cold water temperatures, officials said the estimated survival time is about one to three hours. But finally, help arrived.

Shortly before 8 p.m., two people on a 36-foot sailboat - Robert and Lana Lohe of Edgewater, Maryland - were coming back from a trip to the Bahamas when they saw something in the water.

They lifted Danielson, who was stiff and blue, onto their sailboat, wrapped him in a blanket and called for help. Two other boaters - William Walls and Mark Marra, also of Edgewater - raced to the location in their 29-foot fishing boat after hearing the call over the radio.

Danielson was barely conscious and suffering from severe hypothermia. The boaters took off his wet clothing, wrapped him in blankets and rubbed his limbs for warmth.

Robert Lohe said if Danielson "hadn't stayed with the kayak, we never would have seen him. Without those things, he would have been gone."

At the recognition ceremony on Wednesday, Natural Resources Police Col. Robert Ziegler said that because of the four boaters' "selfless and decisive actions, a man's life was saved."

Candy Thomson, a Natural Resources Police spokeswoman, said what made Danielson's situation unique was that no one was looking for him at the time.

"We don't often have happy endings when the situation is so dire," she said. "But [Danielson] survived because he did three things: wore his life jacket, had a whistle and stayed with his lime-green boat so he could be seen as it got dark."

Danielson said it was emotional to meet the people credited with saving him. He said no more deep-water kayaking - he'll stick to areas where he can swim to shore in an emergency.

Promoted
Listen to the latest songs, only on JioSaavn.com
"I can't thank them enough," he said. "Had it not been for them, I would not be here today."