Horses Chase Man Fleeing Cops, Kick Him Out Of Pasture In Viral Video

"Great job and I loved the horses chasing him!" wrote one person in the comments section 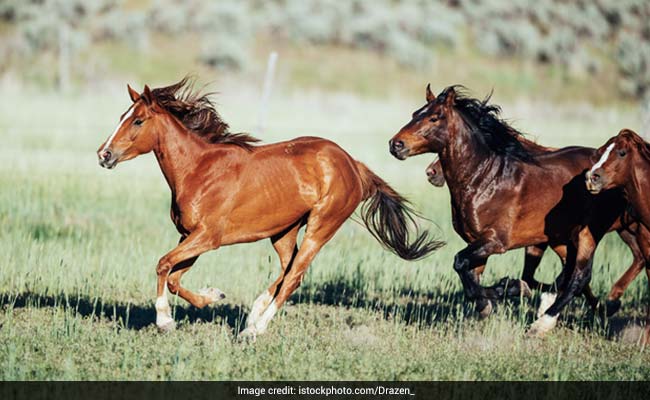 A police helicopter in Florida, USA, captured the moment a man fleeing cops was chased through a pasture by a trio of horses before being arrested. The Volusia County Sheriff's Office shared aerial footage of the chase on social media on Wednesday, where it has amused thousands of viewers.

According to Click Orlando, the suspect, identified as 29-year-old Dominic Maultsby, was approached by the police for driving with an illegible licence plate. He decided to run away from the cops in a bid to escape punishment.

The video shows him driving his vehicle across a lawn before getting out and hopping a fence to enter a horse pasture. Unfortunately for him, the three horses in the pasture do not take the intrusion lying down and start chasing him.

At one point, one of the horses kicks Mr Maultsby, throwing him to the ground, before running away. He then jumps the fence - and is immediately apprehended by police officers lying in wait for him.

Since being shared online, the video has amassed over 37,000 views on Facebook, along with a ton of comments.

"Great job and I loved the horses chasing him!" wrote one person in the comments section. "Great work deputies. Thanks for sharing!" said another.

Wow! Good job to all the officers and those horses!

Between the horses in Volusia and the cows in Sanford, maybe the K9 unit should be renamed the "Animal Unit" to include EVERY animal that helps in chases.

Dominic Maultsby has been charged with fleeing and eluding, driving with a suspended license and violating probation.

Incredibly enough, this isn't even the first time that crime-fighting animals have helped the police in Florida. Last year, a herd of cows chased a woman fleeing the police across their field, ultimately helping in her arrest.