"They MOOOOOOOOOOved in on the suspect," quipped one commenter 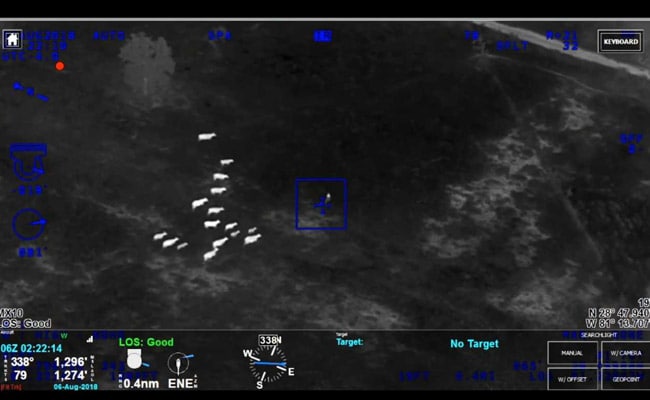 Aerial footage shows a herd of cows chasing Jennifer Kaufman through a field.

A woman accused of stealing a car in Florida had her escape attempt thwarted by a herd of cows. According to the Seminole County Sheriff's Office, "a herd of cattle provided law enforcement a big assist, repeatedly following and helping corral one who strayed on to their turf!" The incident took place on Monday when two suspects led police on a chase after stealing a car. While one was arrested by cops after the car crashed into a ditch in Sanford, the other - a woman identified as Jennifer Kaufman - fled to a nearby field on foot.

However, aerial footage from a Seminole County Sheriff's Office helicopter shows a herd of cows chasing Ms Kaufman. In the video, Ms Kaufman can be seen running through a field with more than two dozen cows in pursuit. According to the Orlando Sentinel, the cows managed to corner the suspect at a fence, where officers from the Sanford Police Department were waiting to arrest her.

A video of the chase was shared on Facebook by the Seminole County Sheriff's Office, who assisted the Sanford Police Department.

Since being shared online on Tuesday, the video has collected over 2.4 lakh views and almost 4,000 'shares'.

"Guess the cows "heard" there was a bad guy," quipped one person in the comments section. "Haha!!! They MOOOOOOOOOOved in on the suspect," laughed another.

According to Fox News, both Ms Kaufman and her accomplice were charged with trespassing, petit theft, drug possession and resisting arrest. In Florida, petit theft is defined as the theft of property that values more than $100 but less than $300. It is punishable with penalties that may include jail, probation, community service, and restitution, according to the official website of the Florida Legislature.

In September last year, in a bizarre move, a man jumped into the ocean to evade arrest - only to be chased by a shark. He was eventually rescued and arrested.