Here's Why A Sweater By Designer Michael Kors Has Twitter Furious

Michael Kors is now being accused of cultural appropriation

American designer Michael Kors is facing massive backlash on Twitter for a sweater from his Spring 2019 collection, debuted at New York Fashion Week on Wednesday. The sweater in question - a black and grey striped one - has people furious because it appears to be identical to sweaters traditionally worn by Mexicans. Many on social media noticed that the sweater closely resembled the traditional Baja jacket or the 'jerga' of Mexico - a thread hoodie with a large pocket on the front and vents on the side. Since then, the designer has been accused of cultural appropriation and plagiarism by Twitter.

The issue was first brought to light when Santiago Perez Grovas, who, according to Daily Mail, is a photographer and architect from Mexico City, posted an image on Twitter which showed him in a sweater that closely resembled Michael Kors'.

"New collection by MichaelKors that probably costs thousands of pesos...-Sweatshirt that I bought in the market of Coyoacan two years ago for 200 pesos," he wrote, sharing two images.

Ever since that, Twitter has been flooded with furious posts from users who want the designer to give credit where it's due. Many are calling out the billionaire designer for making a profit by selling indigenous designs for thousands of dollars.

"Michael Kors wants you to know that he discovered the #mexican jerga at #NYFW. Next week he's going to introduce the world to the sari or the kimono or the hanbok," writes one Twitter user. "This new Michael Kors is literally just a copy of what some cultural groups have worn for years! While he'll be selling this for at least $100 these poor people are out on the streets settling for 100 pesos (under 10 dollars!)" says another.

Shame that plagie a Mexican design made by indigenous craftsmen for many years. With which they earn their living. Each Mexican has at least 1 of these for a price less than 20 dollars and You dare to sell it in thousands. pic.twitter.com/0OnRelOvmi

@MichaelKors / You are a thief Michael Kors because you are using / selling a Mexican design for your business. Almost every Mexican wears it pic.twitter.com/1w4Us5loDd

Hey, Michael Kors, he has plagiarized a Mexican design, made for years by indigenous craftsmen. have a little bit of shame. pic.twitter.com/iakrwaa1dL

Funny that a so called "designer" presents as his "own creation & inspiration", a sweatshirt from Mexico and Central America. Somebody found inspiration in other people's designs. What's that called?@MichaelKors@heidiklum@Canal_Sony@Hombre_Chango@EonlineLatino@EOnlineStylepic.twitter.com/6KKE5cVZrH

Another model during the show also wore a sweater similar to the Mexican jerga. 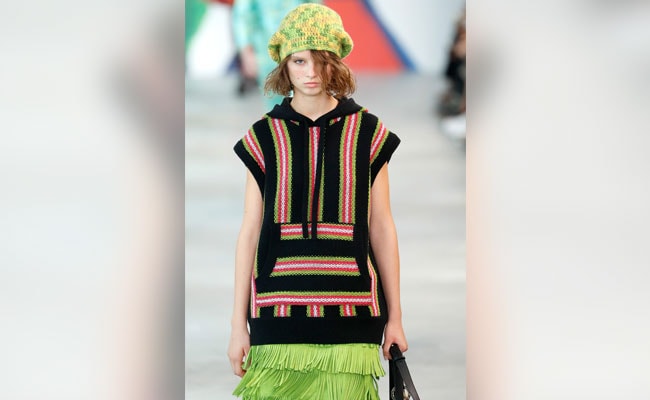 Michael Kors' Spring 2019 collection features colourful and bright clothes inspired by the beach. Ironically enough, the 59-year-old designer notes that his designs have been inspired by travel and "global getaways", and that he wants them to "spread the joy."