On Thursday, a video showed the cat looking out of the window of the blazing apartment, and then jumping out 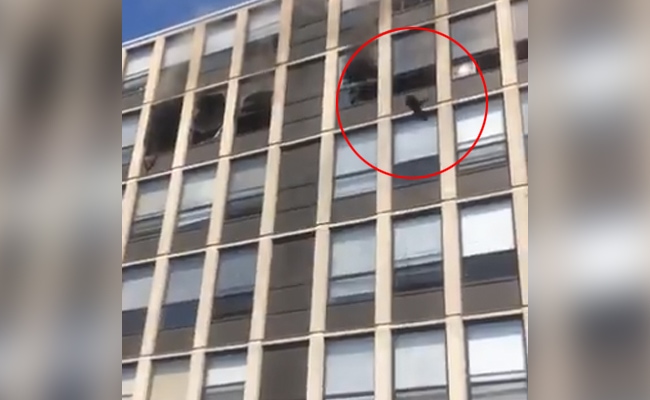 The onlookers screamed before breathing a sigh of relief once the -flying feline- landed.

The Chicago Fire Department had shared a video on Twitter on Thursday that showed a black cat taking a leap of faith from the fifth-floor window of an apartment unit in Englewood, which was engulfed in flames.

The cat first looks out cautiously from the broken windows from where one can see smoke billowing out, takes stock of the height, then jumps and lands on all fours, before running away. However, the now famous feline, called Hennessy, has since not returned home. According to a tweet put out by the Chicago Fire Department yesterday, Hennessy's owner said the cat didn't go outside.

Larry Langford, the director of the department, said that neighbours near 65th and Lowe were out looking for the cat. Langford was the one who captured Hennessy's jump. He had his camera while his team was trying to put out the fire.

Cat update. Hennessy the flying cat has not returned home yet. Neighbors near 65th and Lowe are out looking for the now famous feline. His owner says he is a house cat that did not go out. We will update if he is located.(Langford)

As the cat emerged and leapt from the plumes of smoke, the onlookers screamed before breathing a sigh of relief once the “flying feline” landed.

The Chicago Fire Department, responding to the call of a fire in the kitchen, was able to douse the flames in under 15 minutes, but it appeared the cat was in no mood to wait for that long. Firefighters tried to get to the cat, but it ran into the flames, Langford said.

The video of the cat that was shared by the department's media handle on Twitter has gone viral and has been viewed nearly 7.5 lakh times and retweeted by about 5,000 users.

Nine lives for a cat that jumped from fire at 65th and Lowe. Cat hit grass bounced and walked away! pic.twitter.com/LRBsjMta2Z

As soon the neighbours came to know that the cat had jumped from the building and had not been traced, they, too, are helping the family find Hennessy. The Chicago Fire Department said they will keep everyone updated on the cat and share more information once they locate her.

On Twitter, the feline lovers suggested their own ways to help the family, neighbours and the department trace the cat.

“Leave the cat box outside, they can smell from far away, it will help him get home. They also tend to ask/meow for help around sunset," suggested a Twitter user @vsxs.

Leave his catbox outside, they can smell from far away, it will help him gwt home. They are also tend to ask/meow for help around sunset.

Another user, @danecayco, who claimed to be an animal rescuer, advised searching for the cat in the bushes across the street. "The cat could even climb up a tree or thick bushes. Calling may not be successful as many cats don't meow loudly, especially an injured or a shocked cat. Use a strong searchlight after dark," the user added

I am an animal rescuer. My advice - search up the bushes across the street. The cat could even climb up a tree or thick bushes.
Calling may not be successful as many cats don't meow loudly, esp. an injured or a shocked cat. Use a strong searchlight after dark.

Suggest going outside and calling at 2 am. All of my escapees have come home around that time. Also dirty litterbox outside in bushes and if any of family's clothes are not smoke-filled, put them outside so cat smells their scent. Cats don't usually go far.

Tell them to look under cars too.. when my daughter's cat was leisurely sitting on a window ledge, her roommate accidentally closed the window and her cat couldn't come back in and hid under cars in front of the apartment until she found him the next day ????

My experience is cats don't go far. Also, this cat is most likely injured.

@LaraBricker we need a pet detective in Chicago! This is the cat who jumped out of the 5th floor window of a building on fire ???? https://t.co/m92mT6GE4j

They said he walked away, but shock is a hell of a drug. Hope he isn't seriously injured. https://t.co/k7DOBvfhtY

A study carried out by the American Veterinary Medical Association said that cats can safely jump from a maximum height of five-and-a-half stories. Not just that, the study showed that shorter jumps stood a higher chance of causing injury because cats need time to give their body the best shape to slow their fall.