Over 1.6 million views for this unusual wedding scene. 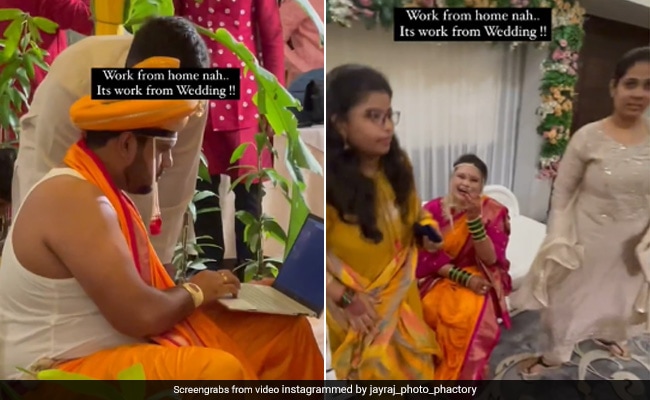 A groom works on his laptop during his wedding in a viral video.

Thanks to 'work from home' these past few months, many of us are used to logging in at odd hours to complete office tasks. But one groom took things a bit too far when he started working at the mandap during his wedding. A video that has gone viral online shows the groom sitting at the mandap and working on a laptop, while a few guests mill around him. The unusual scene was captured during a Marathi wedding, according to photographer Jay-Raj Vijaysingh Deshmukh, who shared the video on Instagram earlier this month.

In the clip, the groom can be seen working intently on his laptop before the camera pans to show the bride's reaction. Sitting a few steps away from the groom, she was seen laughing at the scene unfolding before her.

"Busy Groom, laughing bride. That's what we noticed in this wedding," the photographer wrote while sharing the video.

The Instagram Reels video has gone viral on the photo and video sharing platform with over 1.6 million views and hundreds of amused comments.

"When boss rejects your leave application," wrote one person in the comments section.

"Marry a guy who is this prompt," another said.

Some pointed out that the groom was, in all probability, setting up a video call so friends and family could attend the wedding virtually.

In February, a picture of a groom working on his wedding night had been turned into a hugely popular meme on social media.