"Hold On Babe": Pic Of Groom Using Computer As Bride Waits Is Now A ROFL Meme

The strange moment captured in the photograph has amused thousands of people on social media. 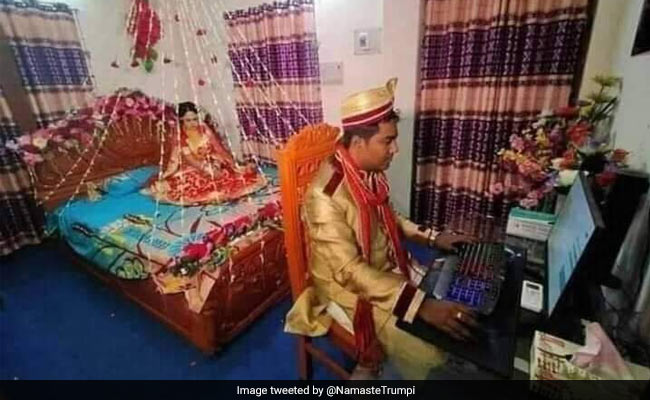 A picture of a groom using a computer has become a meme on Twitter.

This groom took screen addiction to a whole new level. A photograph of a man using a computer while still dressed in his wedding finery has gone viral on Twitter and, predictably enough, been turned into a meme. The picture shows the groom sitting in front of a desktop computer while his bride waits for him. Both the newlyweds were photographed still in their wedding outfits, with the bride wearing a red lehenga and the groom in a golden ensemble.

The strange moment captured in the photographed has amused thousands of people on social media. Since it surfaced online a day ago, the picture has been turned into a hilarious meme by Twitter users. Shared with the words "Hold on babe", this meme has taken over the microblogging platform and tickled thousands of users.

Take a look at some of the funniest "Hold on babe" memes that are taking over Twitter:

"hold on babe, let me finish my shift" #WFHpic.twitter.com/6Z6gO5kIvI

hold on babe , let me delete my search history pic.twitter.com/PTCtOK2vya

It's not clear where the picture is from and how it captured Twitter's attention, but this is not the first time that the Internet has plucked something from obscurity and helped it reach the heights of viral fame. Last year, one of the strangest and most viral Internet trends - the Binod craze - began with one innocuous YouTube comment.

Which meme did you like best? Let us know using the comments section.