"Traveling on overcrowded trains through Germany. And I'm finally on my way home!" wrote Greta Thunberg. 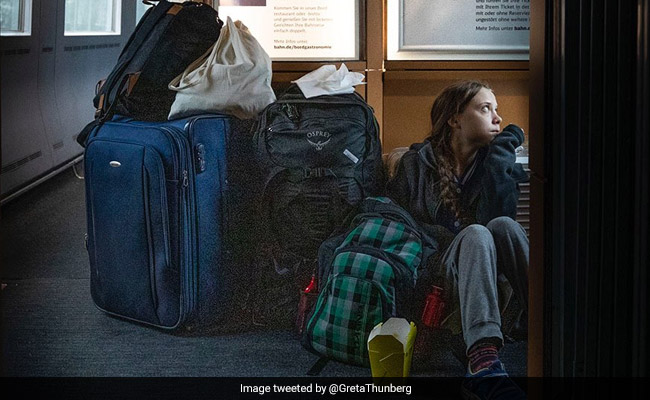 Thunberg, 16, provoked a testy reaction from Germany's oft-maligned rail operator when she tweeted from a DB train on her journey home from the COP25 climate summit in Madrid.

"Traveling on overcrowded trains through Germany. And I'm finally on my way home!" wrote Thunberg above a picture of herself sitting on the floor of a carriage surrounded by suitcases.

Traveling on overcrowded trains through Germany. And I'm finally on my way home! pic.twitter.com/ssfLCPsR8o

DB responded testily, pointing out that Thunberg had travelled in first class during her journey through Germany.

"Dear Greta, thanks for supporting us railway workers in our fight against climate change. We are happy that you travelled with us on the ICE 174 on Saturday," tweeted DB's official account in German.

"It would have been nicer if you had also mentioned the friendly and competent manner in which you were treated by staff at your seat in first class," they added.

The company then followed up the tweets with a press release, in which they added that Greta's travel companions "were sitting in first class from Frankfurt onwards".

Thunberg hit back on Twitter, claiming she had found a seat at a stop after Frankfurt, which she said was "no problem".

"Our train from Basel was taken out of traffic. So we sat on the floor of two different trains. After Goettingen I got a seat," wrote the 16-year-old.

"This is no problem of course and I never said it was. Overcrowded trains is a great sign because it means the demand for train travel is high!"

Our train from Basel was taken out of traffic. So we sat on the floor on 2 different trains. After Göttingen I got a seat.This is no problem of course and I never said it was. Overcrowded trains is a great sign because it means the demand for train travel is high!

Thunberg's journey through Germany was the last leg of a continent-spanning trip which began when she travelled to New York on a low-emissions yacht last August.

Th 16-year-old activist started a worldwide movement last year when she began to strike from school every Friday to protest government inaction on climate change.

Refusing to fly, she has twice crossed the Atlantic by boat in recent months in order to speak at a UN climate summit in New York and the hastily rearranged COP25 summit in Madrid.

Her online run-in with Deutsche Bahn comes just days after a high-profile Twitter clash with US president Donald Trump.

After Thunberg was named TIME magazine's person of the year, Trump tweeted that she had "anger management problems" and told her to "chill".

Thunberg responded by changing her Twitter bio to include the words "currently chilling".