The alligator was seen walking away bashfully after dropping his food. 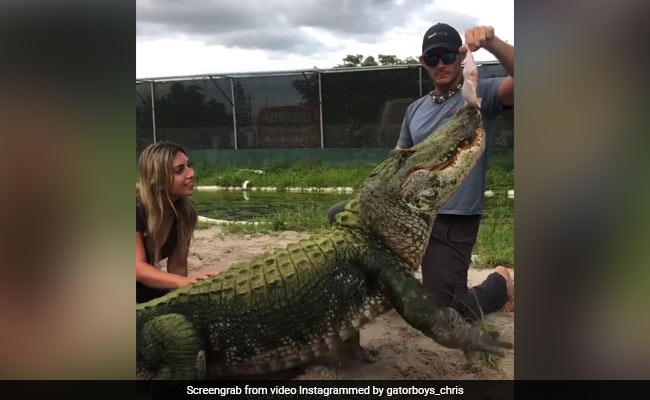 Christopher Gillette wanted an impressive video of Seven the alligator. What he ended up with, instead, was an adorable one after the gator missed an easy catch and walked away bashfully.

Mr Gillette, a wildlife biologist at Florida's Everglades Holiday Park, recently took to Instagram to share a clip of Seven. The video shows him dangling a piece of chicken in front of the gator before tossing it his way to catch. Seven the alligator, however, fumbles and misses an easy catch - much to his own surprise and embarrassment.

The alligator was seen walking away bashfully after dropping his food. "How cute is Seven fumbling the chicken and getting embarrassed! He's so adorable," wrote Mr Gillette. "@gabbynikolle and I were feeding him and trying to make a cool impressive video with the big gator and instead it became an adorable one."

He also explained that the video is actually from last year, but gained popularity only recently. Watch the hilarious footage below:

How cute is Seven fumbling the chicken and getting embarrassed ????! He's so adorable, @gabbynikolle and I were feeding him and trying to make a cool impressive video with the big gator and instead it became an adorable one ???? At @evergladesholidaypark This video is from last year but has recently gained popularity! You'll notice Seven is green in this video, that's just an algae accumulation from the pump being broken that week, it's totally normal and does not affect the gators in any way. They have it in the wild all the time. But it does bring up the point, there are actually NO GREEN GATORS!! even though they're portrayed green in every cartoon and animation, they do not have green skin! Black, gray, yellows, oranges in their patterns, but no green. The only green you'll see is from algae like this. #Gator#Alligator#Florida#SouthFlorida#Everglades#Glades#Miami#FortLauderdale#biggator #animals #reptiles #cuteanimals

Since being posted on Instagram this Saturday, the video has collected over 1.2 lakh views and a ton of comments.

"It's so cute to think that such a massive dangerous creature could feel embarrassed though cause he didn't catch his chicken," wrote one person in the comments section.

"Always loved this one! it's hilarious. And yes I saw it being shared on some popular meme pages!" another wrote.