Find out what this sweet grandmother told George Clooney at the Toronto International Film Festival. It made the actor smile. 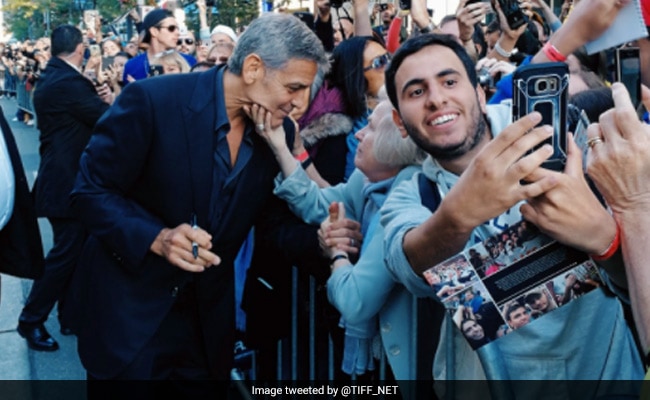 George Clooney met this adorable grandma at the Toronto International Film Festival. This photo is viral.

In case you needed any evidence of the fact that American superstar George Clooney's fans include, well, just about everyone, look no further than this picture going viral. A photo of a Canadian grandmother meeting the actor as he walked the red carpet at the Toronto International Film Festival, or TIFF, has delighted many on social media and prompted a Photoshop battle on Reddit.

Ms Wolf tells Canada's Global News her daughter Brigitte is "in love" with the heartthrob. So, as the actor walked past her, she decided to yell out, "George, my daughter is in love with you."

Ms Wolf says a startled Mr Clooney replied with an "Oh my God."

He then smiled and reached over to clasp her hand. That's when she grabbed his chin.

"He is very handsome," she tells the BBC. "It was over in a moment, I was just so, so taken by that."

The photo, taken by a TIFF photographer, was posted on TIFF's official Twitter account with the caption: "FYI: Your Nonna found George and told him he wasn't eating enough." Nonna is the Italian word for grandmother.

FYI: Your Nonna found George and told him he wasn't eating enough.

"That's adorable," tweeted one person. "Even George knows real Nonnas squeeze faces! Good for both of them," tweeted another.

Promoted
Listen to the latest songs, only on JioSaavn.com
On Reddit, people had plenty of fun with the viral photo. Take a look:


Mr Clooney was at the film festival to promote his latest film, Suburbicon.Click for more trending news