Man Accidentally Ejects Himself From Jet, 2,500-Feet In The Air

The 64-year-old had been very nervous about the flight. 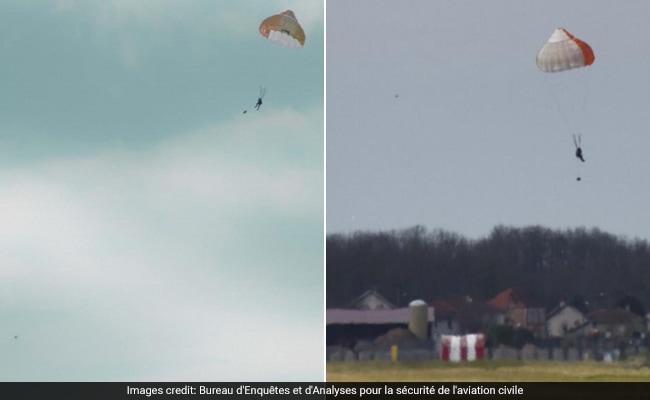 A photo released by the Bureau of Enquiry and Analysis for Civil Aviation Safety of France.

A French man accidentally ejected himself from a fighter jet and tumbled through the sky before landing in a field. According to CNN, the man - who has not been named - was so nervous during the surprise joyride his co-workers had organised for him that he grabbed the ejector button in panic while 2,500 feet above ground. Luckily, the 64-year-old managed to escape from the accident with only minor injuries.

According to a recently-released report by the Bureau of Enquiry and Analysis for Civil Aviation Safety of France, the incident took place in March last year. The man is an executive at a military weapons company and his employees had organised a surprise joyride in a fighter jet - a Dassault Rafale B - for him. He had no previous military aviation experience.

When they arrived at the Saint-Dizier air base and the man realised what his co-workers had planned, he became extremely stressed. His heart was beating at a rate of 120 to 145 beats a minute leading up to the flight, the report said, according to USA Today, but he felt he could not turn down the ride due to peer pressure.

During the flight, when the pilot began to climb, the man panicked and reached for something to hold on to. Unfortunately, he ended up grabbing the ejector seat button. To make matters even worse, he had neglected to secure his helmet properly, which went flying into the air as he was ejected from the fighter jet.

Fortunately, the man avoided serious injury after parachuting down to a field near the airbase. He was taken to a hospital. The pilot also landed the plane safely after that, despite suffering some minor facial injuries.