Forget Selfie, This 'Elphie' will Floor You 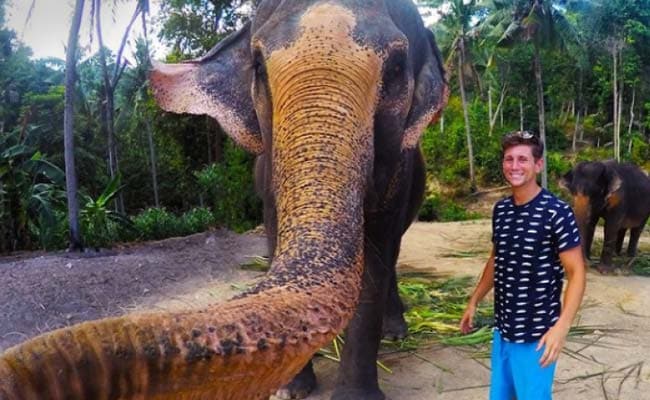 Vancouver: If you were left stunned by a black macaque's selfie last year that became a tug of war between Wikipedia and the photographer about who owned the selfie, this awesome "elphie" is going to floor you completely.

Now trending on social media, the elephant selfie or "elphie" has taken users by storm.

The "elphie" is courtesy Christian LeBlanc, a former student from University of British Columbia, who is now studying in Thailand, globalnews.ca reported.

The "elphie" was taken on Koh Phangan Island in southeast Thailand.

"I was taking photos and feeding the elephant bananas until I ran out of bananas and the elephant grabbed my Gopro while the camera was set to 'timelapse'," LeBlanc told globalnews.ca. This allowed the camera continuous shooting and enabled it to take the "elphie".

The stunning photo has now been shared by LeBlanc on her Instragram account.

Last year, a selfie taken by a black macaque on the Indonesian island of Sulawesi had become a tug of war between Wikipedia and the photographer who claims he is the owner of the selfie. Wikipedia has refused to remove the famous selfie, saying the monkey - and not the photographer - owns the copyright because the animal took it.

The photographer David Slater was clicking photos of crested black macaques in 2011 when one of the endangered monkeys hijacked his camera and snapped hundreds of pictures. Among those, there were some stunning images, including a selfie of the macaque that made headlines.

Promoted
Listen to the latest songs, only on JioSaavn.com
Later, the US Copyright Office confirmed that a monkey - or any other animal - that takes a selfie does not own the copyright of the photo.

In an update to copyright regulations and practices, the US regulator spelled out examples of works that are not eligible for protection. These included -- photograph taken by a "monkey" and -- mural painted by an elephant".