In the image, the puppy is sleeping blissfully unaware of the ripples its photo has created in the cryptocurrency world. 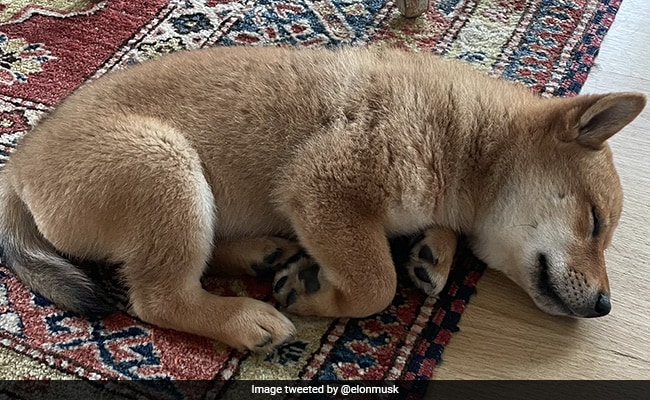 Elon Musk has done it again. Thanks to a tweet by the Tesla and SpaceX founder, prices of cryptocurrencies including Dogecoin and several obscure tokens saw a surge in the last 24 hours. So, how did Mr Musk achieve this? All Mr Musk had to do was share a photo of his new pet dog, a Shiba Inu puppy. In the image, the puppy is sleeping blissfully unaware of the ripples its photo has created in the cryptocurrency world. Along with the photo, the billionaire wrote in the caption “Floki has arrived”. Soon enough, Mr Musk's tweet went viral.

And before long, there were tangible effects of the tweet, with several cryptocurrencies with names similar to that of the dog recording a spike in prices.

The winner in terms of price spike among Floki-themed currencies was Shiba Floki, which saw a record surge of 958.09 per cent within 24 hours of the tweet being posted, Coin Market Cap revealed. Currently, the currency is witnessing a 648.39 per cent surge.

Floki coin has surged to all-time highs and is now up over 250% after Elon Musk tweeted a picture of his new dog with the caption "Floki has arrived" pic.twitter.com/HUovApZiWt

It also came as no surprise that the image of the Shiba Inu dog also has an impact on Dogecoin prices. The cryptocurrency, created in 2013 by Billy Markus and Jackson Palmer, was made as a joke and features the dog with the symbol “D”.

It soon became a popular cryptocurrency thanks to the endorsement by Mr Musk. After this new tweet, Dogecoin gained by 0.36 per cent. Similarly, another cryptocurrency inspired by Dogecoin, Baby Doge Coin has recorded a rise of 45.3 per cent in the last 24 hours.

This is not the first time that Mr Musk's tweets have helped push the prices of currencies inspired by Shiba Inu or with a Floki connection. In August, when the entrepreneur had announced that he would be naming his pet “Floki”, Shiba Inu saw a 16 per cent rise in its price.

My Shiba Inu will be named Floki

Reacting to Mr Musk's new tweet, the official Twitter account of Dogecoin wrote, “Mr Musk sir, I just want to let you know that your doge is shaped somewhat like a small bean. Thank you. That is all.”

mr musk sir i just want to let u know that ur doge is shaped somewhat like a smol bean thank u that is all https://t.co/wWYfZnPUiC

Mr Musk's opinions on social media as well as his tweets have changed the course of cryptocurrencies in the past. Now, it is all eyes on the Floki-inspired cryptocurrencies to see if they will gain popularity like Dogecoin and prove to be just one-hit wonders.