This natural phenomenon is known as 'sundog' or 'phantom sun'. 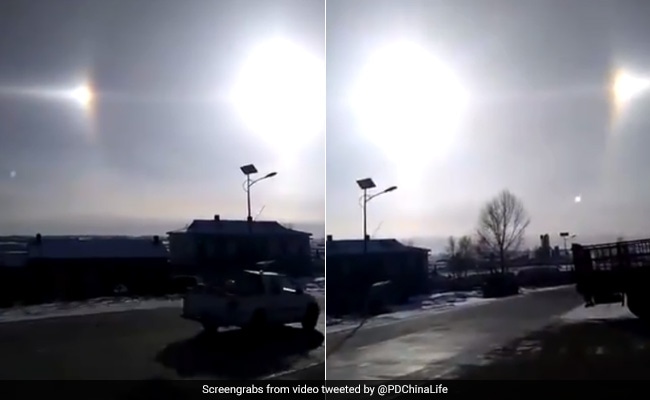 An incredible video shows 'five sunrises' in the sky.

Sunrise seekers in China were greeted with a pretty epic view as they recently woke up to see "five suns" apparently hanging above the horizon of a province in Inner Mongolia.

The mesmerizing video was shared by one of the leading media outlets of China with the caption: "What a spectacular wonder! Five suns are seen shining in the sky in N. China's Inner Mongolia."

What a spectacular wonder! Five suns are seen shining in the sky in N China's Inner Mongolia pic.twitter.com/SqqF2Bi99R

The scientific explanation of the phenomenon is cited as an elaborate optical illusion that requires temperatures of -20 degrees. According to Daily Mail, a 'sundog' or 'phantom sun' occurs due to  small pockets of ice suspended in the air.

As the post went viral, Twitter users flooded the comments s section of the video with their reactions.

A user wrote, "And only one is extraterrestrial."

Another wrote, "It's a sun dog, whippee!"

"Is this because of all the pollution?" asked one user.

A post read, "Yes. The end of the day, a lovely sunset. I think that's what it was."