Fearless Grandma Drags Cobra, Tosses It Away In Jaw-Dropping Video

Social media is full of admiration for the woman in the video. 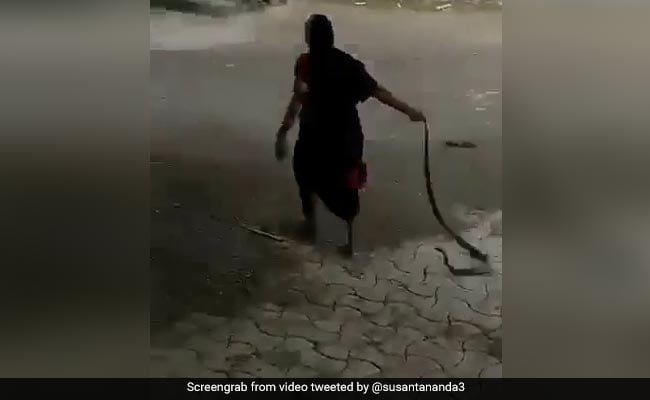 An elderly woman was filmed dragging and tossing a cobra away.

This video might make you stop and stare in disbelief - for it shows the unlikely sight of an elderly woman dragging and tossing a huge cobra away - as casually as if it were a length of rope instead of a venomous snake. The video, which is being widely circulated online, was shared this morning on Twitter by Indian Forest Services officer Susanta Nanda, who identified the snake as a cobra.

In the video, the old woman is seen walking with the snake, held firmly in one hand, dragging behind her. After crossing an open compound surrounded by houses, she reaches an open space and throws the cobra away.

"Grandma that's not the way to treat a COBRA," wrote Mr Nanda while sharing the video on the microblogging platform.

Grandma that's not the way to treat a COBRA???? pic.twitter.com/RkQg8gdBQk

Since being posted on Twitter this morning by Mr Nanda, the video has collected nearly 7,000 views and several shocked comments. Many viewers admired the woman's courage and handling of the venomous snake. Others tried to guess where the footage was filmed, with many suggesting somewhere in Gujarat.

The Cobra might have got confused, does really every one fears me?

"What a brave lady," wrote one person in the comments section. "She's a pro," said another.

The undated video surfaced on Reddit two days ago, and has since made its way to other social media platforms like Facebook and Twitter. It is not the only cobra video that has left social media users amazed of late. Recently, a video of a man giving a bath to a king cobra had also gone viral.